Beavers are industrious and efficient mammals that I had an opportunity to watch and photograph on a recent trip to Grand Teton NP in northwest Wyoming. According to the 2014 documentary “Wild Canada,” when the first European fur traders appeared in North America there were over 400 million beavers living on the continent. Trapped and hunted almost to the point of extinction, it wasn’t until beaver pelts fell out of vogue with European fashion that their numbers began to increase, which again according to the documentary, are now estimated to be around 12 million. 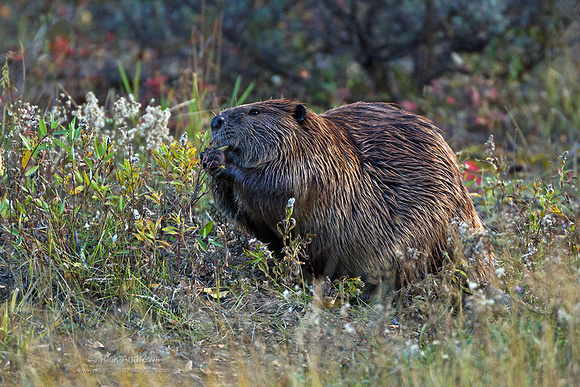 A keystone species able to positively impact eco systems, their dams and lodges are engineering marvels built with twigs, sticks and branches, woven together layer upon layer, and finished off with mud, moss and stones. Their dams filter rainfall and snow melt, allowing silt and sediment to settle, and clear water to flow. The dams also reduce flooding by creating wetlands that are used by numerous species of birds and waterfowl, as well as amphibians such as toads and frogs. Their ponds also support vegetation rich in sodium which is sought by ungulates such as deer and moose, and the trees they cut down open the forest to sunlight, thereby encouraging new plant life to grow.

Beavers are nocturnal mammals that normally don’t appear until after sunset, although on cloudy days I sometimes saw them a little earlier. Each evening would typically begin the same way as the heads of one or two adults would suddenly pop up close to their lodge. After a quick look around they would take a short effortless swim to assess their surroundings before disappearing again beneath the surface. Beavers are excellent swimmers and can stay underwater for up to 15 minutes at a time. While submerged both their nose and ears have valves that close off so water doesn’t get in, and since their lips are located behind their teeth, they can also close of their throats while chewing on branches underwater. It wasn’t clear to me during this time whether they were actually still submerged or had perhaps returned via the underwater entrance to their lodge, though I suspect this was likely the case. Regardless, after a few minutes they reappeared again, this time with their young kits, until at times I counted at least six beavers. 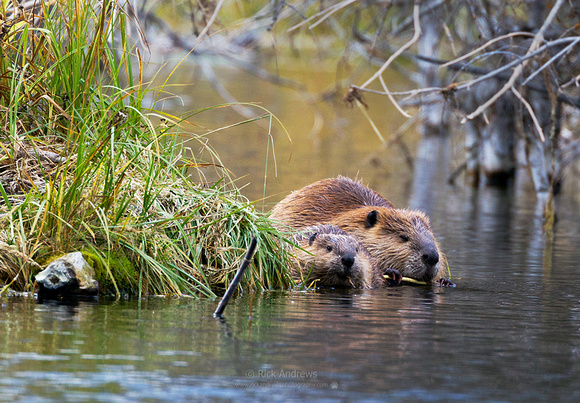 Kits are born in late spring and emerge from the lodge sometime in July. Although beavers usually give birth to 8 or 9 kits at a time, a videographer shooting footage for a documentary on the greater Yellowstone area, told me they have been known to produce as many as 16 in a single litter. Kits stay with the family until they are 2 years old during which time they remain vulnerable to predator species such as wolves, coyotes and bears.

Although they are excellent swimmers, on land they appear less agile as they waddle ponderously along their well beaten paths. But this can be quite deceptive as on more than one occasion I observed them moving surprisingly fast after sensing danger in the area. Their activities changed nightly, yet whether that was repairing the lodge or dam with mud, moss or new sticks and branches, or cutting new branches for winter storage, it appeared they were all involved in the same activity, even the kits. 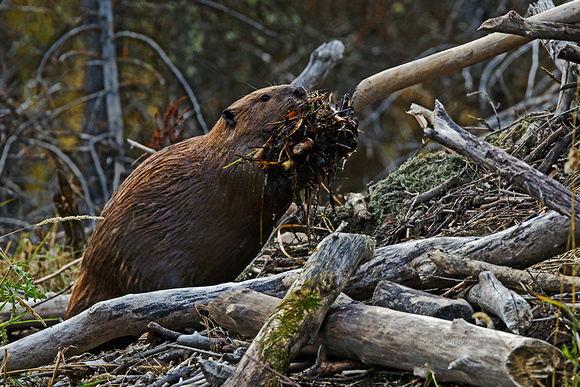 Beavers are vegetarian and feed primarily on twigs and branches, and since this food is low in calories, they must spend a lot of their time eating. Their front teeth have a very hard orange surface with a softer surface on the back that wears down at a quicker rate than the front. This keeps them razor sharp and listening to them gnawing on a fallen cottonwood tree reminded me of a carpenter using a sharp chisel to shape wood. The layer just beneath the bark appears to be the one they favour as food, but once this layer has been removed and consumed, their gnawing often continued until a large piece had been removed after which it was dragged back to the pond for use on the lodge or dam. Some pieces were almost as large as the beaver itself, yet being one of the largest rodents in the world, they appeared to use their size and strength to great advantage.

For winter, beaver stockpile twigs and branches close to their lodge by sticking one end of it into the bottom of the pond, they can then retrieve and feed from their cache without having to surface through the ice.

The beaver’s tail is probably their most versatile tool. Most people who have seen beavers swimming, have likely witnessed their trademark tail slap whenever they sense danger. But in addition to using it as a warning signal they also use their tails as a rudder, as well as to help support and balance themselves while walking on their hind legs. But perhaps a lesser known fact is that their tails also contain fat reserves that they draw upon during the cold winter months.

I really enjoyed the time I spent watching, photographing and learning from this family of beavers, and was always disappointed when the light was lost and it came time to pack up and go. Perhaps this is why I was always so anxious to return again the following evening, but then again, perhaps it was just that beavers are such fascinating animals to watch, study and to learn from, something I hope to do many times again.