Last week I was very happy to screen my documentary film “Wildlife of the Oldman River Valley” at the fifth annual KEPA (Kainai Ecosystems Protection Association) Summit held that day at the University of Lethbridge. The following day, as a registrant of the Summit, I was honoured to visit the Belly Buttes, and watch a Niitoy-yiss (tipi) raising and transfer ceremony at the “Aakokaa’tsin” (Sun Dance) site on the Blood Reserve.

The Belly Buttes are sacred sites that the Blackfoot First Nation have traditionally visited for thousands of years. On a clear day from the top of the Buttes one can see the Porcupine Hills to the north, the Cypress Hills to the east, and Chief Mountain and the Sweetgrass Hills to the south in Montana. While there, we were told by one of the elders that when Treaty Seven was first conceived, the Canadian Government wanted to move the Kainai to an area around Gleichen, Alberta. But the Kainai wanted to remain in the very southern part of the Province, insisting that the Belly Buttes must be included in their Reserve. Today it lies at its centre.

Stretching out below the Belly Buttes is the land where the Kainai traditionally camp for their annual aakokaa’tsin. The aakokaa'tsin is a great cultural celebration held in midsummer during which the dancers honour the sun. Because it once included self torture, it was banned by the Indian Act of 1885, but in 1951 the ban was dropped.

Not all niitoy-yiss covers are painted, but those that are, are done with purpose, and the right to paint a niitoy-yiss cover is considered a great honour that is transferred from one person to another by way of formal ceremony. 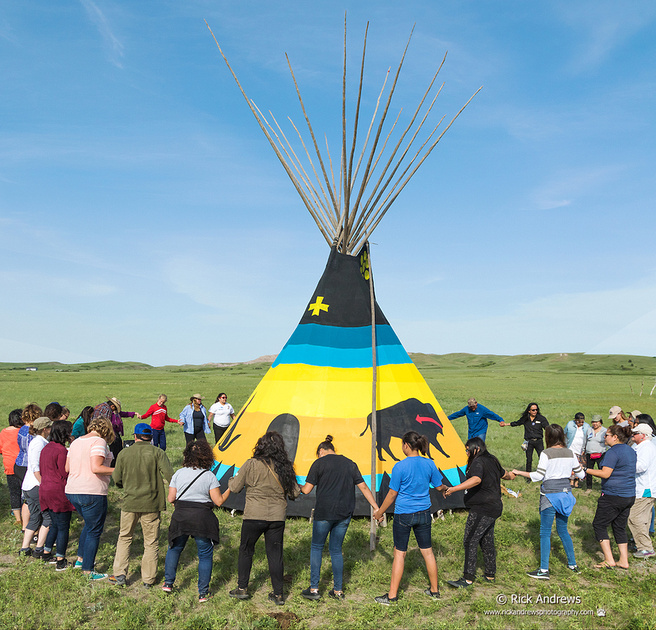 The design of this cover was conceived by Kainai elder Charlie Crow Chief and painted by fellow band member William Singer III. The bottom design symbolizes the earth and pays a spiritual tribute to the importance of mother earth as the source of all physical life. The top symbolizes the father sky as the upper limit of the physical world and includes a cross representing the morning star or a butterfly, and the 7 stars of the big dipper, representing children who have gone back to the stars, who are now away from danger and are there to teach the importance of caring for the children of future generations.

All human events therefore occurred between mother earth below and father sky above, and the space between the two is traditionally used to depict human events and interaction. On this cover, each of the four Kainai clans are represented - the buffalo, wolf, eagle and beaver.

Once the niitoy-yiss had been erected, we were then invited inside to witness the transfer ceremony in which its construction and design were then passed along to others. 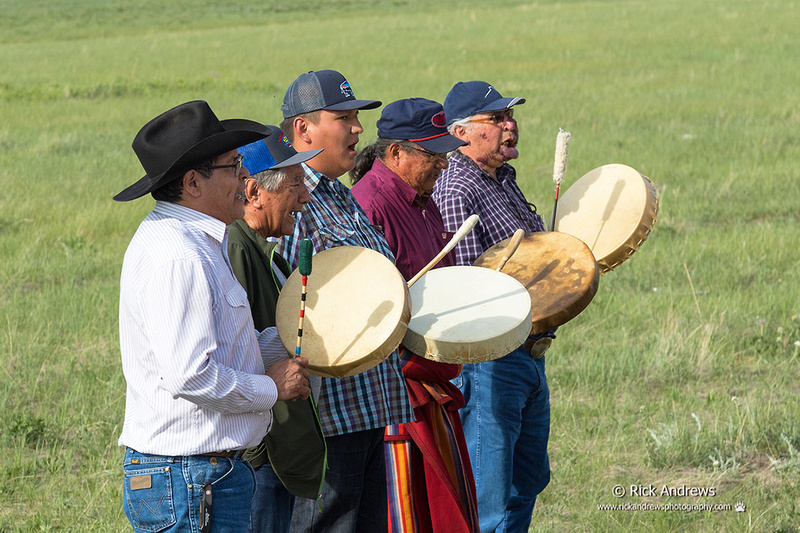 It is not everyone who is invited to visit these sacred sites, observe the ceremonies or hear the stories told by Kainai elders. I feel extremely privileged therefore to have been included and remain ever grateful for having witnessed these very special events.

I would also like to offer my special thanks to Blackfoot consultant Api’ soomaahka, for his input and guidance in the writing of this blog post.