I normally don't look forward to flying in small aircraft because the passenger cabin is often cramped and seldom has room for my camera gear. But earlier this month I experienced the exception when I flew from Anchorage, Alaska, to Lake Clark National Park in a de Havilland Beaver.

The DHC-Beaver was a workhorse that was used extensively as both a passenger and utility aircraft to open up much of northern Canada and Alaska. So having the opportunity to fly in one of these historically significant aircraft (powered by a 9 cylinder radial engine) was a very thrilling experience indeed.

Our flight southwest from Anchorage treated us to spectacular views. On one side we saw the sparkling waters of Cooke Inlet; and on the other, the snow-capped mountains and glaciers of the Alaska Range; while below us, the rivers connected both, carrying glacial silt into the ocean in a variety of stunning shapes and coloured patterns. 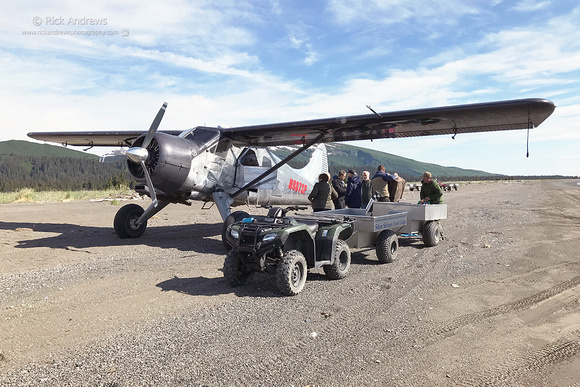 After landing on the beach a short distance from the Silver Salmon Creek Lodge, we were met by our bear guide Dave Rasmus, who promptly transported us and all our gear back to the lodge via ATV and buggy. We would work out of the lodge for the next week and with over 19 hours of daylight each day, we put in some pretty long days. But no one complained, we all understood that to come away with the best images, we would have to put in the time, be patient and willing to wait for the right opportunities to come along.

I also understood that a very important part of our success would depend upon having a good bear guide, and from my experience, Dave is one of the best. He has worked at the lodge for the last seven or eight seasons and has known many of these bears since they were cubs. Knowing where and when to find them is key, as is knowing their temperament. This was especially true for the males, as well as mothers with cubs, and that week we photographed them all.

After leaving the lodge early one morning we found a couple of two-year old's perched high in a conifer with Mom using guttural sounds and lip smacking calls to encourage them to come down. Coastal Brown Bear (Ursus arctos) cubs will usually only “tree” to escape danger, and in so doing they had tipped us off to the presence of a male in the area. The cubs were very tentative when they finally reached the ground, and it took a reassuring nip on the neck from Mom before the smaller and more timid of the two was willing to follow her into the open.

That week we also watched the tides very closely, especially the negative tides which occur when the ocean is below mean sea level. It is during these negative tides that the bears venture out onto the tidal flats to supplement their spring diet of grass and sedge with shellfish. 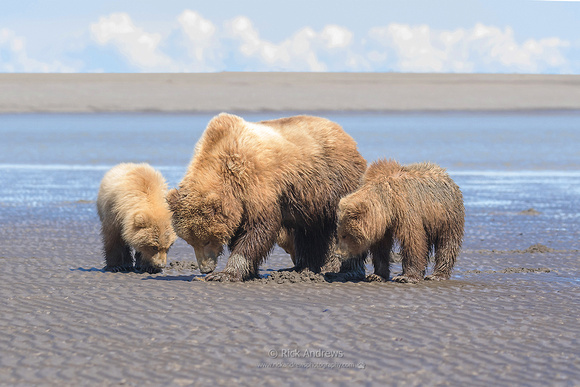 CoastBrownBear-8881A mother Coastal Brown Bear shows two of her cubs how to find and eat clams on the beach of Lake Clark NP, Alaska.

A Mom with the 3 one-year old cubs (whom we called "Mom and Three") were often the first ones out there. Yet while she was busy sniffing out and locating clam beds, the cubs often burned off steam by chasing each other around and play fighting. Then once they had tired each other out, they returned to Mom and watched her closely as she showed them how to find clam beds, and just as importantly, how to dig them up and open them.

After snacking on the beach, they would often return to the open meadow situated between the mountain forests and the beach. This not only provided them with an abundance of fresh nutritious grass, but also generous sight lines from which to keep a wary eye out for male bears. 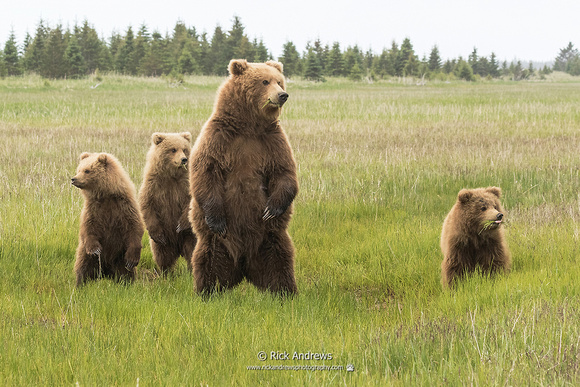 CoastBrownBear-3291"Mom and Three" stand to scan the horizon for male bears.

June is mating season for most North America bears and earlier that week we watched as a young male and female began courting each other. It was clear she was interested in him, but the male seemed a little unsure of himself, and the playful mating game gradually deteriorated into nothing more than a friendly wrestling match.

But one evening while we were photographing the "Mom and Two," we noticed a large male bear slowly making his way towards them. The sun was still a little above the trees, so we had to shade our eyes to see him, yet it was clear by the way the mother kept eating that she hadn’t seen him yet. As the male got closer she finally caught wind of him and began running. Immediately her cubs were off and running too, one running beside her while the other crossed the creek and ran along the far bank. After a short distance the male gave up the chase, with his message delivered, he returned to a young female we had seen him with earlier that day. 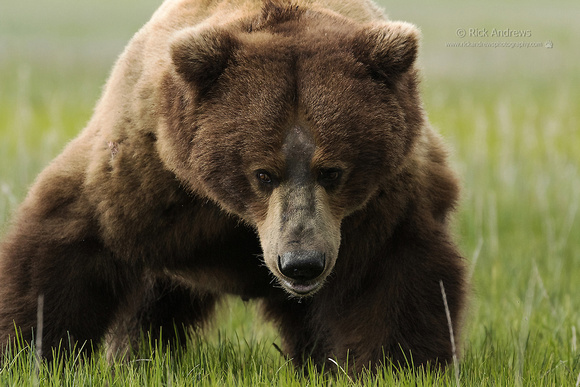 If given half a chance, males will kill young cubs. While this may seem cruel to us, this behaviour is common practice amongst most bear species, and is thought to perhaps drive the female back into estrus. It was also perhaps due to this aggression that we didn't see any mothers with Spring cubs this year, as they were reluctant to bring new cubs out into the open with so many aggressive males around.

On several occasions however, we were fortunate to watch the “Mom and Three” as she laid down to nurse her cubs right in front of us, although the first few times she turned her back which didn't lead to the most advantageous camera angles. But later in the week, she was so comfortable with our presence, that she laid down in the grass and faced us just a few meters away. I was so captivated by this, that after taking a few quick shots, I put down my camera to watch this special event, and appreciate this phenomenal trust she had placed in us. 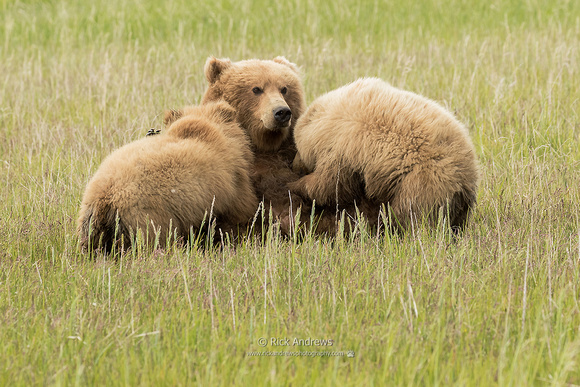 Our week in Lake Clark National Park was awesome and I’d like to thank Dave Rasmus of Silver Salmon Creek Lodge for his friendship and expertise in guiding us, and keeping us, as well as the bears, safe. A very special thanks also to Marc Latremouille, for his camaraderie and dedicated effort in organizing and conducting this very successful workshop. It was a memorable week for all the right reasons, and one I will never forget.