The Spirit Bear - Animal of Legend

“Come with me” says Marven Robinson, our Gitga’at bear guide, gesturing to our small group of wildlife photographers to follow him. He leads us to another location just a little further upstream, but as we approach, we discover that it is already occupied by a black bear eating a very large pink salmon.

Although I live in western Canada, it has taken three flights, a ferry, and a two and a half hour water taxi ride to reach the Gitga’at First Nations village of Hartley Bay. From there we traveled another hour or so by boat, before hiking the final leg to reach this location on a remote island off the northwest coast of British Columbia, Canada. 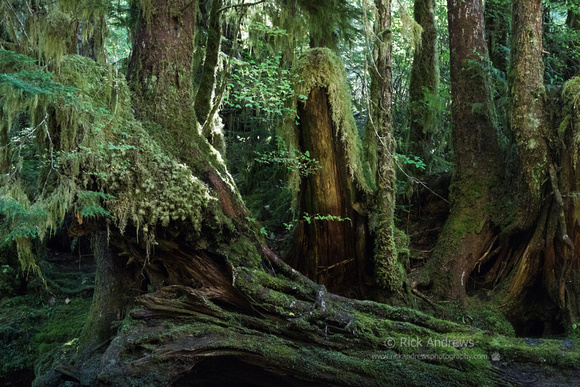 This is the Great Bear Rainforest, an area where the Pacific Ocean meets the coastal mountains of North America, and because more than 3 metres of rain fall here every year, it is home to the largest remaining intact temperate rainforest on the planet. It is also home to a very rare creature, an animal of legend - the Spirit Bear.

Gitga’at legend recounts a time when the earth was covered with ice and snow, and the people found it hard to survive. Raven (the Creator) said he would make things easier for them and melted the ice so that plants and trees could grow. He told them to take care of the land, and to remind them of this time when the earth was pristine, he flew amongst the black bears making every tenth one white, a bear the Gitga’at call - moksgm’ol.

But this bear is not an albino, biologists tell us that the Spirit Bear (Ursus americanus kermodei) or Kermode Bear as it is also known, is a very rare subspecies of American black bear that receives its white coat from a double recessive gene. Current estimates put its numbers at somewhere between 200 and 400, making it one of the rarest subspecies of bear on earth. In fact it is so rare that many Gitga’at elders have never seen one.

Working closely with Marven, our personal wildlife guide and field biologist Tim Irvin has been staying current with the movement of bears in this area to hopefully improve our chances of finding this shy and elusive animal. Yesterday we went to another creek on the other side of the island, but although we saw several black bears, the Spirit Bear eluded us. So today we have come to this creek where we are told there has been a recent sighting.

The black bear eating the salmon directly in front of us seems content and not alarmed in any way. Perhaps he recognizes Marven who has known many of these bears since they were cubs. Marven gestures for us to take our positions beside the creek directly in front of the bear, and as we begin to move forward, between the overhanging trees I catch my first glimpse of what I think may be a Spirit Bear.

Today is a very special day in this rainforest for more reasons than one. In an area that often experiences thick cloud and heavy autumn rains, today dawned bright and sunny, and as I look again through the trees I am still not sure what I am seeing. I have never seen anything like this before. Backlit by the sun, the bear looks as though it could be a ghostly apparition, as if it is somehow illuminated and glowing from within. It is a very moving, spiritual moment, and I think I may understand how the first Gitga’at people to see a Spirit Bear may have felt.

The Spirit Bear searches the creek for salmon.

At this time of year, bears are attracted to these creeks by salmon returning from the ocean to spawn. Because the shallow waters of the creek make it difficult for salmon to swim upstream, it also makes them easy prey for bears. Gaining as much body weight as possible before winter hibernation is essential to bear survival, as well as the continued survival of their cubs. Salmon are also consumed by other wildlife such as coastal wolves, bald eagles and ravens, and since salmon carcasses are often discarded on the rainforest floor, nitrogen from their decaying bodies helps fertilize the soil. Salmon are therefore an integral and essential part of this entire ecosystem.

As I look around however, I am disappointed there is no longer any old growth forest on this creek. In decades past, this area of the Great Bear Rainforest was known as the “mid-coast timber supply area,” and was logged so extensively that today most trees on this creek are young Red Alders and mixed conifers. But earlier this year the British Columbia government announced that it was going to protect 85% of the Great Bear Rainforest from further logging, which given this provincial governments previous environmental protection record, is a significant step. 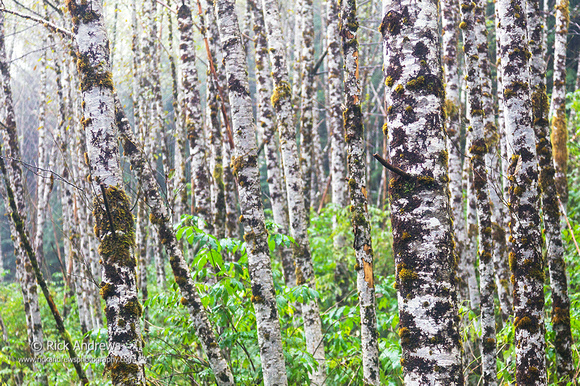 Due to previous decades of logging on this creek, many of the remaining trees are now Alder and mixed conifers.

With the exception of the Spirit Bear however, this forest protection does not extend to its wildlife. While Coastal First Nations are opposed to trophy hunting on their lands, the BC government allows wolves, cougars, grizzly bears and even black bears carrying the recessive gene to be legally hunted here. The future of this modern day Shangri-La may also be further threatened by the proposed Enbridge Northern Gateway Pipeline that would see heavy crude from Alberta’s tar sands transported to this coast, then loaded onto supertankers for shipment to Asian markets.

Ten years ago, the BC flagship ferry “Queen of the North” crashed into Gill Island and sank with two passengers still aboard after failing to make a simple course correction at the mouth of Grenville Channel. In a similar incident in 1989, the Exxon Valdez also failed to make a simple course correction, hitting a shoal and breaking apart before spilling over 200,000 barrels of oil into Alaska’s Prince William Sound. By comparison, the supertankers that would sail these waters are designed to carry 2 million barrels of oil, and would be required to negotiate 5 right angle turns in a distance of less than twenty miles. For this reason many local area residents are fearful that the same thing will happen here, with equally catastrophic results. 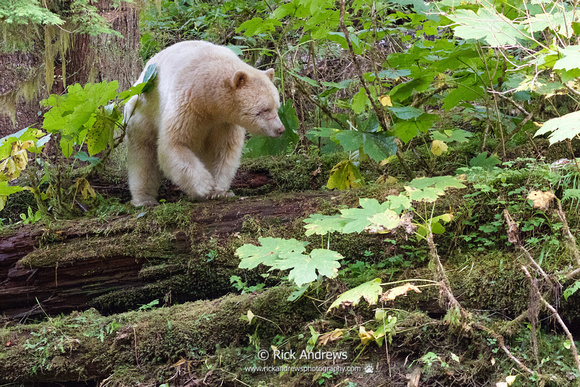 The Spirit Bear has likely roamed the Great Bear Rainforest for thousands of years.

Canada's Prime Minister, Justin Trudeau, was recently quoted as saying "the Great Bear Rainforest is no place for a crude oil pipeline", yet while some may find this comment encouraging, this week the Canadian Government approved the proposal to construct a $7 billion Pacific Northwest natural gas pipeline to transport natural gas from northeastern British Columbia to the coast. The proposal also includes a new $11.4 billion export terminal to be built on Lelu Island in the Skeena River, where the natural gas would be then liguified before shipping it to Asian markets.

The approval comes amid concerns about the export terminals greenhouse gas emissions (estimated to be 5.28 million tonnes per year) as well as those created by the collection and transportation of the natural gas (estimated at another 6.5 - 8.7 million tonnes) as they both pose a significant ecological threat. With the proposed tanker traffic also comes increasing concern for its impact on the Skeena River salmon habitat, as well as those of whales and other marine wildlife. Since everything in this ecosystem is interconnected, I am concerned about these impacts on the future of the Great Bear Rainforest, as well as the wildlife that inhabit it.

After taking its fill of the pink salmon, the black bear literally brushes by us as it hurriedly re-enters the creek. As I look up I see that the male Spirit Bear is now making his way downstream towards us, and may be the reason for the black bears hasty retreat. But I am still beguiled by this legendary creature, and as it passes by, a mere 15 metres away, the staccato clicking of camera shutters all around me reminds me that I too should be photographing this amazing animal.

On each of the following two days we were extremely fortunate to see this Spirit Bear again as it silently appeared and began fishing in the creek. Each day it would typically catch and eat two or three salmon before disappearing back into the forest, presumably for a nap. After another hour or so, it would then reappear and resume its fishing. On the third day however, perhaps living up to its name, it slipped silently back into the forest, and we never saw it again. 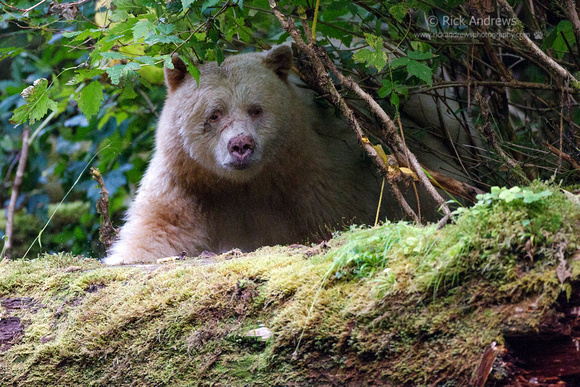 I feel profoundly privileged to have seen and photographed such an amazingly rare and spiritual animal in such magnificent habitat, and can not thank Marven Robinson and Tim Irvin enough for providing me with such an amazing experience. But now that I have seen it for myself, I can not imagine this fantastic place any other way and want it be around so that future generations can see what I have seen and experienced too. Yet the environmental threats to the future of the Great Bear Rainforest, as well as the future of many First Nations people who have lived here for thousands of years, remain very real.

Fortunately, along with Coastal First Nations there are non-profit organizations who are fighting to protect this ancient and stunningly beautiful place. If you would like to become involved in its ongoing preservation, then I encourage you to contact any of these worthy organizations to learn how you can help.

The Liberal Government of Canada announced today that it is rejecting the Enbridge Northern Gateway proposal, in favour of the Kinder Morgan Trans-Mountain pipeline that will transport crude oil from Edmonton to Vancouver.

The government is also scheduled to table legislation shortly that will permanently ban oil tankers from the northern B.C. coast.