As a large brown wing falls lazily over the edge of this gigantic nest it marks the first movement I have seen in over an hour. It is a signal that at least one of the young nestlings is beginning to stir. A few moments later it is followed by the appearance of two heads bobbing from side-to-side with such smoothness they would be the envy of any Bollywood dancer. Now looking directly at me with those big orange eyes, they are no doubt trying to figure out what I am and what I am up to.

I have been watching this nest on and off for several weeks now. In this part of the world, osprey (Pandion haliaetus) are migratory, yet often return to the same nest year after year. The male arrived first and staked his claim to the nest by adding new twigs and grasses that the female re-arranged to her liking once she returned in early May. Then after about three weeks of courtship, she laid her eggs which hatched a few days apart following a month or so of incubation. 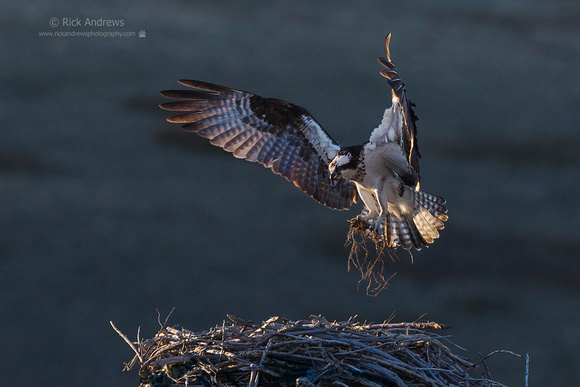 For the first few weeks, I found it difficult to catch even a fleeting glimpse of the nestlings, as the depth of the nest is designed to help keep them safe and hidden from view. I also observed that on those occasions when Dad returned to the nest without a fish, he always seemed to bring a new twig that Mom would use to continue building up the sides. So when I eventually caught my first glimpse of the nestlings, they were already a few weeks old. At first I saw just two, but as they continued to grow, I was pleasantly surprised one day to see three little heads pop up at feeding time.

The nestlings grow quickly, and now at about four or five weeks of age, they are almost full grown and nest space is becoming a premium. To help out, Mom is sitting on the branch of a dead tree about 100 metres away, this way everyone has a little more room and she can still keep a watchful eye on them. 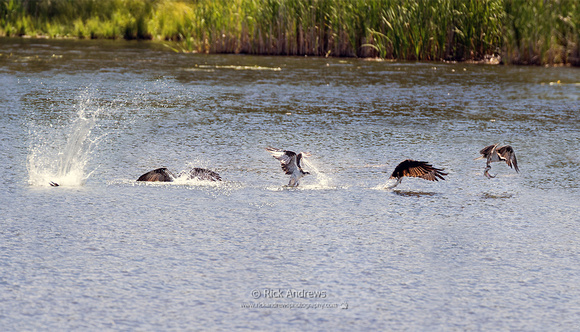 Osprey-5000A sequence of combined shots that show the fishing technique of a male osprey.

Dad meanwhile has been doing a stellar job in keeping the family fed. Last week I watched as he hovered stationary in the sky, waiting for exactly the right moment before plummeting like a stone into the lake below. A pretty gutsy move for a bird unable to swim. As I watched him totally submerged, it occurred to me that osprey have a unique way of fishing that is unlike any other raptor I have seen. Bald eagles and white-tailed eagles for instance can pluck a fish from the water without so much as getting their talons wet. But while osprey may lack this finesse, they are no less effective as fishers. I continued watching as he fought his way to the surface before more flapping eventually got him airborne again. Then placing one foot in front of the other, he used his reversible outer toe (a trait shared only by owls) to carry the fish with two toes in front and two behind. This allowed him to reposition the fish so it was more aerodynamic and easier to carry.

Back on his favourite dead tree perch, Dad ate his fill, then after an exchange of calls with Mom to ensure she and the nestlings were ready, he again took to the air. In three or four wing beats he cleared the trees and streaked towards the nest, and skillfully landed the freshly caught fish. 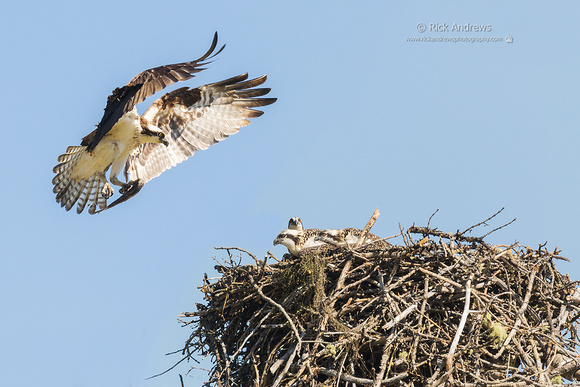 Osprey-7643A male osprey delivers his partially eaten fish to the nest where it will feed his nestlings.

This was his fourth catch of the day and he was visibly tired, so while Mom fed the youngsters he took the opportunity to close his eyes for a few seconds. But his afternoon nap was short lived as he suddenly flew off again to settle in a tall spruce tree on the far side of the lake. 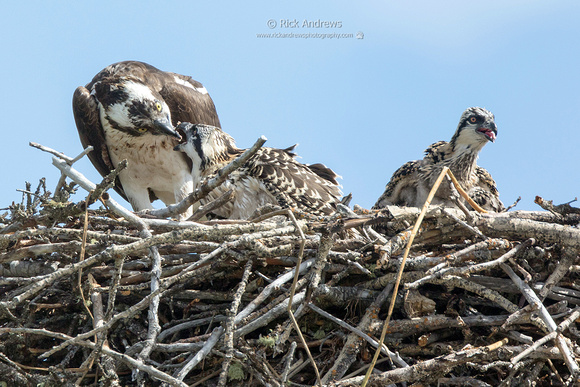 Osprey-5145A female osprey feeds freshly caught fish to one of her triplettes.

As the days wear on, and Mom spends more time away from the nest, she too will join Dad in catching fish to keep the family fed. The youngsters are quickly becoming juveniles and are taking more of an interest in the outside world. Now sitting atop the nest, they are flapping and stretching their wings and spend more time than ever preening themselves as their flight feathers grow in. These feathers are surrounded by a sheath of keratin that the juveniles gently preen off to allow the feather to grow in properly. During this growth, the feather is still supplied with blood and is therefore sensitive to the touch, but once it is fully grown in, the blood supply recedes to the base and the sensitivity is reduced. Osprey-5694The three juvenile osprey sit atop the nest to get a better view of the world that awaits them.

Then one day, at about 7 or 8 weeks old, perhaps during a sudden gust of wind, the most dominant of the three will spread its wings and take to the air for the very first time. It likely will be a short flight, perhaps only to another close by tree. A day or two later, the remaining juveniles will also make their first solo flights and for the first time in weeks, the nest will be empty again. Osprey-5630First flight of a juvenile osprey.

Although the fledglings will now begin spending more time away from the nest, they will not venture too far yet because they still want to be fed. But their future will soon change, and for the next few weeks they will begin accompanying their parents on fishing trips where they will learn to catch fish for themselves. An essential skill if they are to survive their first year.

As fall arrives, the family disperses, and now alone for the first time, each fledgling will follow the coastline south on their solo flight to central and northern South America where they will spend the next year and a half. At two years of age they will make the return trip north to their home territory, where they will build their own nest and seek a mate. Their first attempt may not be successful however as most osprey pairs do not successfully breed until the age of three. But by then, they will possess not only the necessary skills to survive, but also the skills necessary to successfully begin raising and supporting families of their own.

As I pack up and return to my camp, I wonder if I will see these juvenile osprey again someday. That would be nice. In nests of their own, perhaps just over that ridge.