A Tough Year for Grebes

The sun is still a few minutes away from rising on this mid July morning, but already I lay awake in my sleeping bag listening to the sound of red-necked grebes (Podiceps grisegena) calling each other from the bay beside my camp. They would have returned to the lake several weeks ago from their wintering grounds in the sheltered bays and inlets of Canada’s west coast. Their trip would have been challenging, and while they typically nest as isolated pairs, during migration they congregate together at favoured staging sites where groups of over 2000 birds, flying mainly at night, commence their spring migration to our inland lakes and marshes.

Red-necked grebes are monogamous so this pair would have either joined up as migration began, or perhaps sometime after arriving here at the lake. Either way they would have cemented their bond with gifts of aquatic plants which are an important part of their courtship ritual. 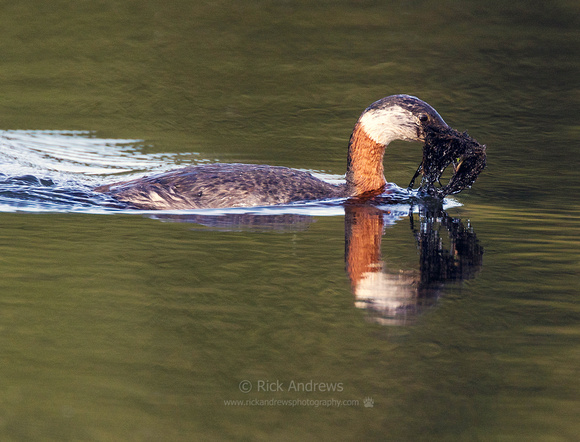 RedNeckGrebe-8716Red-necked grebes collect and present aquatic vegetation to their mates during courting rituals.

For several days now, I’ve been watching and photographing a nesting pair at the other end of this lake. Its difficult to tell the male from the female as during mating season they both have identical colouring. White cheeks contrast sharply with their black heads, while their neck feathers turn to the trademark rufous colour for which they are named. But the male is slightly larger than the female, and so it is only when they are both together that I can really tell them apart.

Last year I watched a pair that had built a nest in the reeds at the edge of the lake, but this years pair have built a more traditional raft nest. Located about 10 metres from the shoreline to protect it from land-based predators, the nest is about 3 metres long and 1 metre wide, it also has a depression in the middle where the eggs are laid and kept. I think it must also be anchored to the bottom somehow to prevent it from being swept away on the whitecaps that are often created here by our Southern Alberta Chinook winds.

When not feeding, the male is kept busy maintaining the nest, adding aquatic vegetation and mud, some of which the female sometimes uses to create a seal between her body and the nest to help maintain the correct temperature for incubation.

Over the next few days I watch them periodically and note that they take turns incubating their eggs. Sometimes however, they are both gone together to feed on small fish, crustaceans and aquatic insects, and I wonder if this has any impact on incubation. 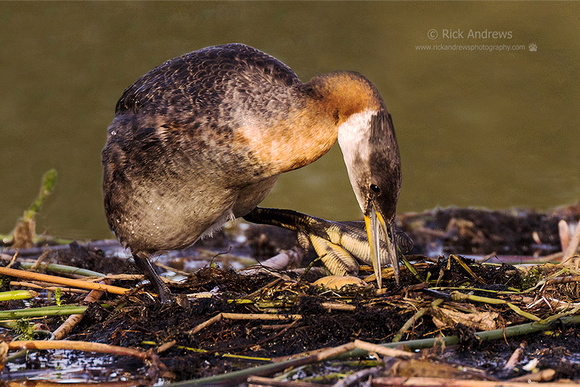 As the female returns, I notice how difficult it is for her to walk on land. Like a loon, her legs are positioned well back on her body, and rather than webbed feet, I see she has lobed toes like those of a Coot. I continue watching as she carefully turns her eggs with her long beak, then inch by inch, as she awkwardly straddles the eggs before resuming her brooding position.

I was still not sure how many eggs were in the nest, but the following day when the parent left to feed I was in a better position to view its contents, and noted there were only two eggs, (clutch size is usually between 1-9). But when I returned again the following day, I noted there was now only one.

It was a few more days before I returned to the nest site again where I found it empty and unkept, and as I looked out onto the lake I could see both grebes swimming there together. Eggs are normally laid from mid-May to June and take between 21–33 days to hatch, but since I do not know when they were laid, it was anyone’s guess as to when they would hatch. But as I watched them both diving for food, it soon became apparent there was no little one on either of their backs. Still I wondered if perhaps it may be hiding in the reeds at the waters edge, but after an hour when they still had not returned, I began to realize this was not likely the case. 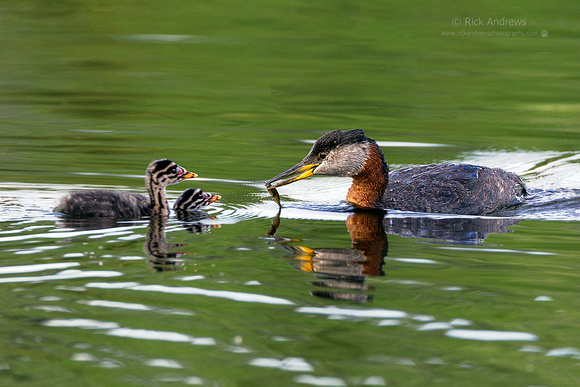 In previous years I had photographed the striped chicks riding on their parents backs or swimming behind them in the shallow water at the edge of the lake. So it was disappointing and sad not to see any little ones this year, especially after watching the dedicated efforts of the parents in a variety of weather conditions. I obviously do not know what grebes feel or think, but I cannot help wondering if they share my disappointment and sadness. One thing I do know however, is that they will very likely be back again next year, to give it another try, hopefully with a better outcome.