It’s shortly after nine in the morning and the Oldman River valley coulee clean-up crew are making signs they are about to begin their workday. Many consider them ugly, yet as I watch them sitting in a dead tree a few feet in front of me, I see neither beauty nor ugliness, just a species perfectly evolved to fulfill one of natures vital functions. Its latin name is Cathartes aura - cleansing breeze* - a somewhat poetic yet apt description of the role of this magnificent bird.

With no feathers on its head, it may look unattractive to some, in fact it is this exposed red skin together with its dark brown feathers that reminded others of a wild turkey, hence its common name - turkey vulture. 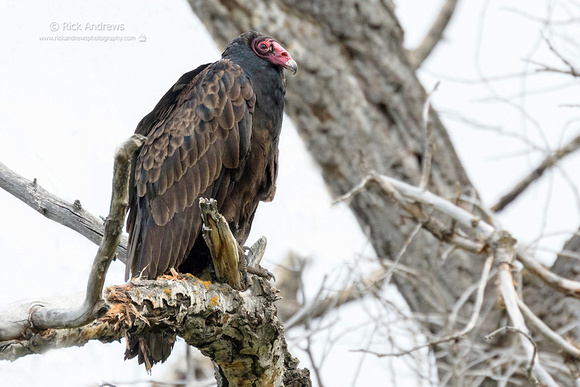 Categorized as a New World vulture, the turkey vulture held great significance to many Native American tribes. Both the Cherokee and Pueblo Indians believed in the healing powers of its feathers. A Lenapé legend also recalls how the turkey vulture saved the world by pushing the sun back into the sky after it came too close to the earth and caused a severe drought. In so doing, the turkey vulture burned all the feathers from its head and charred its once beautiful plumage.

European white settlers and their descendants however didn’t see the turkey vulture in quite the same way. Despite a lack of scientific evidence to back their claims, they insisted that vultures contaminated drinking water and carried anthrax or hog cholera to livestock, and so often shot them on sight. Now protected in Canada (The Convention for the Protection of Migratory Birds), the U.S. (Migratory Protection Act of 1919), and in Mexico (Convention for the Protection of Migratory Birds and Game Mammals), their range has since increased to become the most widespread of all New World vultures which now extends from southern Canada to the southernmost tip of South America. 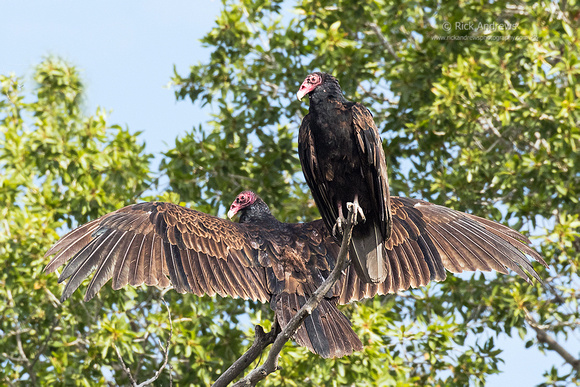 Turkey vultures are unlike many other raptors in that they don’t hunt prey. In part this may be due to possessing what some describe as “weak feet,” the inability to grip or carry prey. Yet this is the way the turkey vulture has evolved, they are consumers of carrion, and have made a very good living at it for millennia. 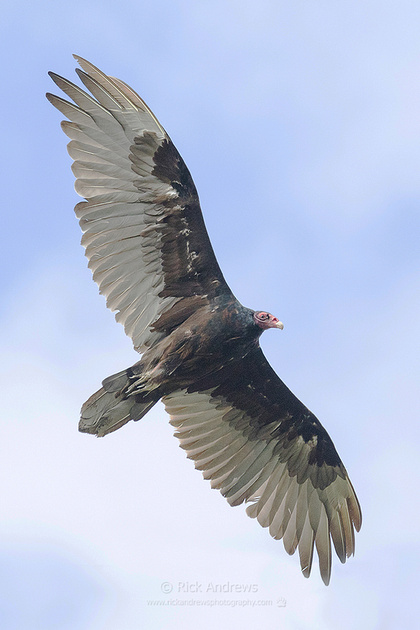 Their evolution also allows them to soar almost non-stop without ever flapping their wings, a significant attribute that no doubt helps them immensely during migration. Our western subspecies, C. a. meridionalis is the most migratory of all turkey vultures which are believed to winter as far south as South America.

From where I’m standing I can see about a dozen or so roosting in the dead tree just ahead of me. At night, they lower their body temperature by about 6 degrees celsius to 34C (93F), and as I look at them now, they are beginning to warm up by turning their backs to the sun and spreading their wings like huge solar panels.

On the hillside across the river I watch another dozen or so as they begin flapping their wings and awkwardly hopping about until they catch enough air to become airborne. A few moments later they are joined by the coulee clean-up crew who I note had a much easier time taking off from the tree.

Almost immediately they begin soaring, helped by an almost 2 metre (6 foot) wingspan they circle somewhat erratically, all the while climbing higher and higher on the rising thermals. From such an altitude it could be imagined that they must posses excellent eyesight, which they do, but they also possess an acute sense of smell that allows them to locate carrion that may be hidden beneath the tree canopy. But with the exception of the river valley, there are few trees in southern Alberta, it's a wide open expanse of farmland, a perfect habitat for the turkey vulture to thrive.