It's the perfect day. The afternoon sun is warm, and the aspen and larch trees are glowing gold. While others are enjoying this beautiful fall day by hiking alpine trails or kayaking pristine mountain lakes, I'm sitting beside a creek doing what I enjoy best - photographing wildlife. Today my subject is the American Dipper (Cinclus mexicanus), or water ouzel as it's sometimes known. Although dippers are usually solitary creatures, from where I'm sitting I can count three. 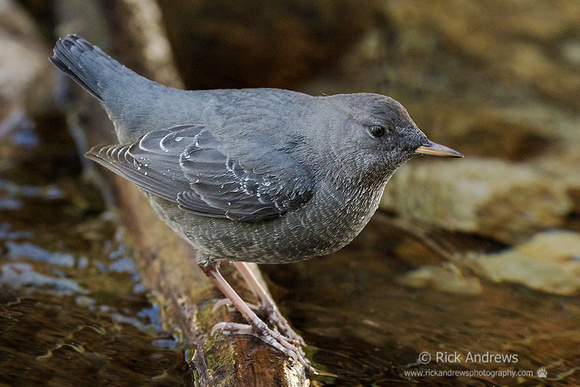 AmDipper-7583The American Dipper can be found in most fast flowing streams from the eastern slopes of the Rocky Mountains to the pacific coast.

There is nothing immediately appealing about the appearance of the dipper, mostly gray/blue in color with a hint of brown on its head and shoulders, it looks a bit like a larger and more rounded version of the wren. Perhaps its only interesting visual features are the white feathers on its eyelids that cause its eyes to flash white as it blinks. Yet if its appearance is rather mundane, the same can’t be said for its behaviour. 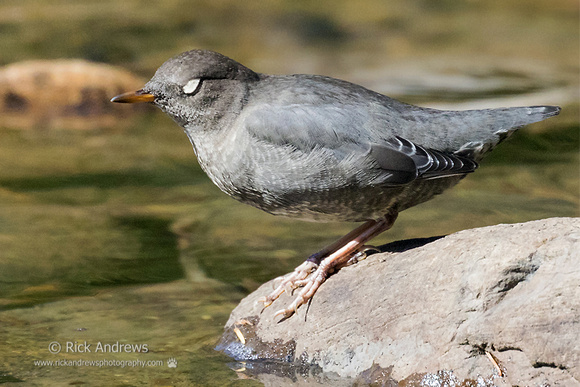 AmDipper-7516The eyelid feathers flash pure white on the American Dipper as it blinks.

Dippers are seldom still, and I watch as one nods and bobs its body up and down while standing on a rock in the middle of the swirling creek. Its gaze is focused on something in the water and as I continue to watch, it suddenly plunges headlong in. For a few moments it is completely submerged, then as if pushed up by some unseen force from below, it emerges effortlessly onto another rock with a minnow in its beak. Looking at its feathers they are almost completely dry, and as I look more closely, I see what little water does remain has beaded up like that on a ducks back. (Isn’t there a saying about that?)

Dippers forage in fast moving streams and creeks, where they often walk along the bottom flipping small stones and decaying leaves in search of aquatic insects, larvae, fish eggs and even small fish. But this habit sometimes makes it vulnerable to large salmonids such as Bull (aka Dolly Varden) Trout that have occasionally been known to prey upon them.

Other ominous threats to dippers include dam construction which floods existing habitat; and land use such as logging, mining and agriculture that not only impacts water quality, but also reduces the availability of the dippers aquatic prey. In some of these affected areas, the dipper has vanished completely, so its presence is considered an indicator of good water quality in any streams and creeks where it's still found.

Another interesting thing about the dipper is that it is North America's only truly aquatic songbird, a fact that wasn’t lost on John Muir, who after encountering the dipper wrote:

“While water sings, so must he …. nearly all of his music is sweet and tender, lapsing from his round breast like water over the smooth lip of a pool, then breaking farther on into a sparkling foam of melodious notes, which glow with subdued enthusiasm.”

Unlike many songbirds however, the dipper doesn’t migrate south for the winter, instead it simply flies to lower elevations in search of fast running water. Protected by its low metabolic rate, an extra oxygen-carrying capacity in its blood, and a thick coat of feathers, dippers are well equipped to endure frequent dips into ice cold water. In fact it was under these exact conditions that I first encountered a dipper several years ago, as we both stood on the frozen ice beside Soda Butte Creek in Yellowstone NP.

But there is no ice today and I watch as one of the dippers enters the water again. This time however it's carried downstream by the current before popping up onto another rock about 30 ft away. Again it jumps into the water and again it’s carried away. I wonder if it’s so focused on catching food that it doesn’t realize it’s being swept downstream, but then again I wonder if it really cares. Then as if to answer my thoughts, it suddenly takes flight, and with a noisy flutter of wing-beats, flies right passed me to land on a twig sticking out of the creek a short distance away. For the first time I’m able to observe just how short its wings are and how much effort it has to expend in order to propel itself just a short distance upstream. But its wings have evolved this way for a reason, its feet are not webbed and so it uses its wings to help it swim to the bottom of lakes and ponds. 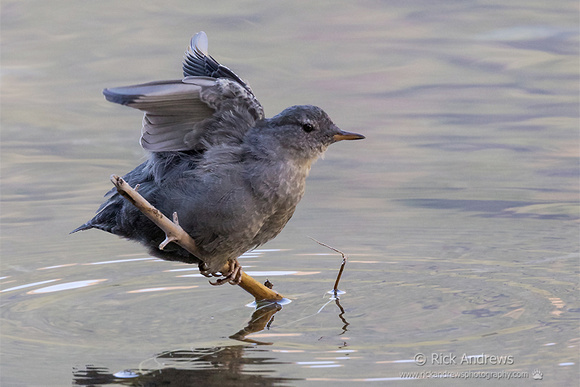 AmDipper-7196An American Dipper (aka Water Ouzel) lands on a twig in a creek in the Canadian Rockies.

I continue to watch and photograph the dippers who now seems oblivious to my presence. This is ideal, it means that my subjects are so comfortable they can completely ignore me and get on with making a living. As a wildlife photographer, this is always what I hope for. As I say, it's a perfect day.