The sound of a wing slap on the water startles me and I look up from my camera’s lcd screen just in time to get splashed in the face. The guilty culprits, about a dozen American White Pelicans are quickly swimming away while glancing back over their shoulders like mischievous children wanting to be chased. While I usually allow wildlife to establish their own comfort zone by approaching me, I wonder if they’re telling me I’m perhaps a bit too close, so I back up and give them a little more room.

I’m spending the morning down at the weir photographing some of my favorite wildlife subjects. People often assume that to photograph wildlife you need to go “somewhere,” but here in Lethbridge we’re fortunate, we don’t have to go anywhere, wildlife is all around us.

The weir is a small dam built by the city to create a deeper body of water, making it easier to divert river water into the water treatment plant. But like a lot of dams that have no fish ladders to aid fish swimming upstream, it traps thousands of minnows that are now easy pickings for hungry predators.

I watch the pelicans as they swim back to the edge of the weir driving the minnows into deeper water where they readily scoop them up. Yesterday I watched from the other side of the river as a group of pelicans drove minnows into shallow water. Then turning their heads and bills sideways, they scooped up the minnows with their bill pouches. Clever birds these pelicans. 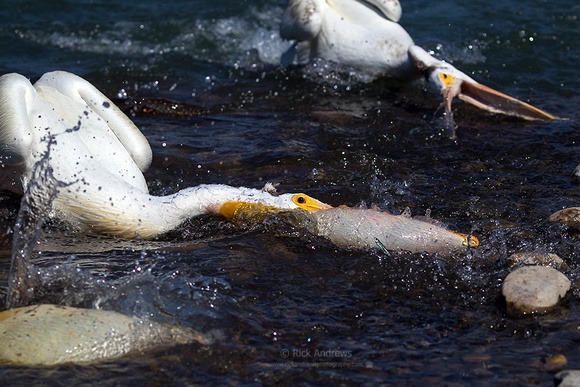 AmWhtPelican-0886American White Pelicans (Pelecanus erythrorhynchos) have learned how to feed on minnows in shallow water.

But pelicans are not the only hunters here today - there are others that are neither bird nor mammal. Reptiles have come to feed on the minnows too, and the pelicans are unwittingly helping them by driving some of the minnows into the shallows.

Wandering garter snakes, a subspecies of the western terrestrial garter snake, are very skilled swimmers and hunters, and I watch as they slip silently into the water. In the shallows I can see them darting about, and it doesn’t take long before they return with a fish in their mouths. 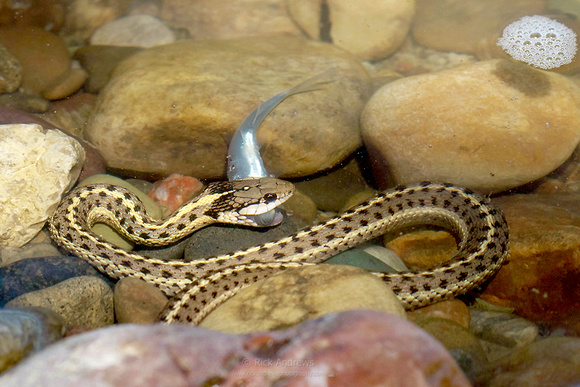 WandGartSnake-2575Snakes are completely at home in the water, even when fully submerged like this wandering garter snake (Thamnophis elegans vagrans) seen here in Southern Alberta.

Given their numbers today, I wonder if I’m not sitting on top of their hibernaculum, especially when I see them climb back up the river bank before disappearing into its numerous cracks and crevices all around me.

A few days later I return, this time bringing local naturalist and snake expert Ken Moore with me. Ken tells me that wandering garter snakes can be found throughout the Oldman River valley, and though they are the least common of Alberta’s three species of garter snakes, in Lethbridge they are the most common. But its a very hot day, perhaps too hot for reptiles, and so we see only one. But that could also have something do with the red-tailed hawk we just saw sitting in a nearby tree as we approached. Along with other raptors such as osprey and owls, herons, weasels, raccoons, foxes and coyotes are all known to prey upon garter snakes too, but today its the garter snake that is the predator. 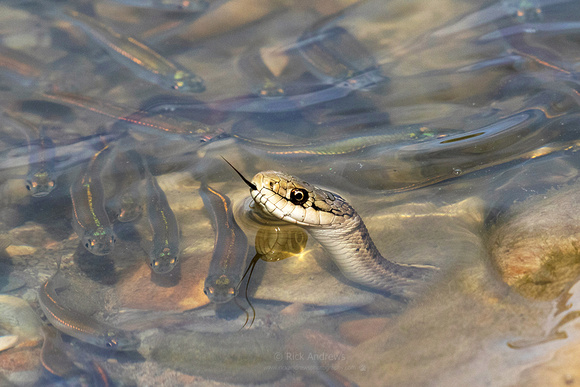 I also learn that on land it finds its prey by smell together with a chemical sensory system known as the Jacobson's organ. During this process garter snakes flick their tongues, sweeping the air for scent molecules, before inserting their now scent enriched tongue tip into two tiny pits in the roof of its mouth. Once their prey species has been located, the actual attack happens very quickly.

Ken also tells me it’s doubtful this is their hibernaculum as its most likely located at least halfway up the coulee - well above the waterline. Besides, their hibernaculum is where they typically den during the winter months, then after mating in the spring, they head out, sometimes traveling as far as 25 km to spend their summers alone. Adults can grow to about a meter in length, but the one we see today is much smaller, so its perhaps a juvenile or maybe a young adult male.

Out on the water, the pelicans continue to feed and are soon joined by others that have been spending their day fishing elsewhere up river. But its getting really hot now and after making its way back up the riverbank, our garter snake disappears into one of the many crevices to cool off. Taking a cue from this little wanderer, we too wander back up the coulee before heading over to Tim’s for a little air-conditioned comfort and a nice cool Iced Capp.

Ya gotta love summer in Lethbridge.