The sun is just beginning to peak over the treetops as I arrive at a toppled cottonwood on the banks of the Oldman River. After scouting out this location a couple of days ago, I'm hoping to photograph Cedar Waxwings, and if I’m lucky, perhaps even a few woodland birds too.

After last evenings thunderstorm, the skies cleared overnight, and this morning is unseasonably cool. But the sun feels good on my back and I welcome its warmth. A mist has formed on the surface of the river, and rising above it, the coulees look stunning in this early morning light. 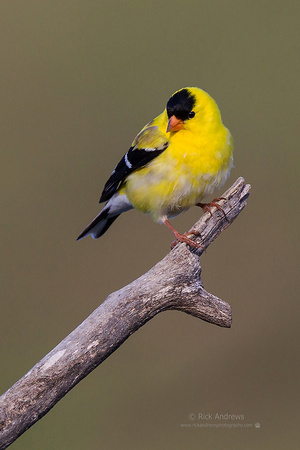 AmGoldFinch-0341-2LAmerican Goldfinches (Carduelis tristis) are found in a variety of habitat including riparian woodlands like these along the Oldman River Valley in southern Alberta.

Across the river, bank swallows are showing off their spectacular aerobatic skills, and below my feet I hear the peep-peep of spotted sandpipers as they scurry to and fro along the river bank. Overhead, American White Pelicans are circling as they climb ever higher in search of that one thermal that will carry them to fishing spots further up river. Its already shaping up to be a great morning.

When I first visited this country I wondered why this river was called Oldman, and assumed wrongly that it must have something to do with the Jerome Kern song. But then I learned that Old Man is a translation of the Niitsítapi (known to settlers as Blackfoot or Blackfeet) word for Na’pi, who was sometimes known as a trickster, but while working in the service of the Creator, made this land for them, then taught them how to take care of it, and if they did that, how in return it would take care of them, forever.

Down river four turkey vultures are circling above the coulees, then as I watch, one by one they land on a grassy slope near the top. Two of them stretch their wings to dry while the other two begin squabbling for no apparent reason.

I get the feeling I’m being watched but in looking around I don't see anything, then through a nearby bush I catch a glimpse of a mule deer doe standing about 30 feet away. I turn to watch the vultures again and when I look back she is gone. Across the river I hear another mule deer calling. Perhaps this one has a fawn stashed somewhere in the underbrush and is now calling for it to come. I look but I can’t see them either. CdrWaxWing-0354Cedar waxwing's (Bombycilla cedrorum) are medium-sized birds, with mostly brown, gray, and yellow colouring. Native to North and Central America, they are named for what look like tiny drops of red wax on their wing tips.

On the highest branch of the fallen cottonwood an American Goldfinch has just landed. Its yellow and black colors contrast sharply and are well lit by the morning light. I manage only a few quick shots before it flies off.

Up river a female mallard swims with 8 ducklings that are now almost as big as she is, while across the other side, a female merganser is leading her six chicks out for their morning swim.

I look back at the tree again and there between the branches I catch my first glimpse of a waxwing. It doesn’t stay long before flying off to the riverbank below me. I assume it must have a nest there as sometimes birds will land in a nearby tree or bush to assess the scene so as not to accidentally reveal the location of the nest to any lurking predators. Apparently I’m classified as low risk.

Over the next hour there is almost a non stop flurry of activity with sometimes as many as six or eight waxwings in the tree at the same time. Although there have been times when I've seen many more waxwings in a single tree, they usually don't congregate in such numbers while nesting. I think that today must be my lucky day, but then as quickly as it begun, it ends. After 15 minutes of inactivity a yellow warbler lands in the tree. I manage a couple of quick shots before it too flies away. It will be the last small bird I photograph today. 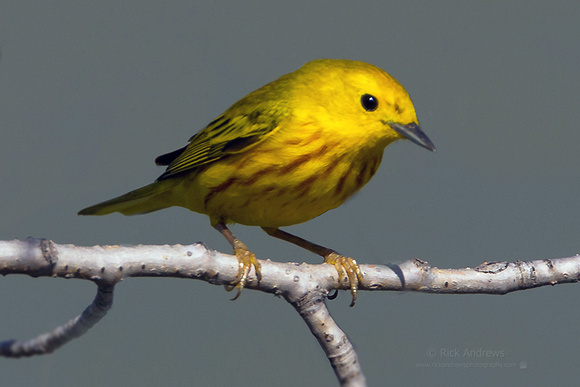 After packing up I begin the half hour walk back to my car, but along the way I decide to make a short detour to check out some American White Pelicans that roost and fish a little further down stream. Over the past few years I’ve spent many hours photographing these birds, they are irresistible. At times they number well over a hundred, but right now there are just six. 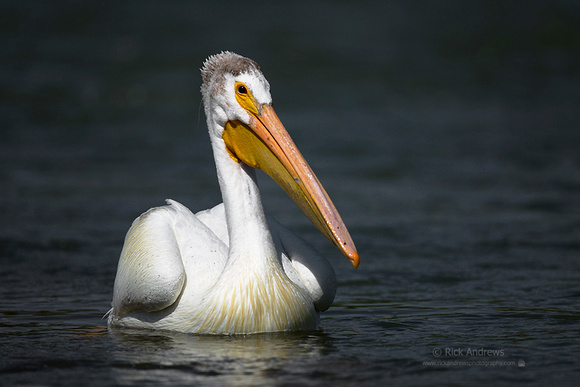 Upstream there are farms and ranches, highways, railways and a dam that have all significantly fragmented this land and impacted the water in ways the Niitsítapi could never have imagined. The place I visited today has been set aside as parkland, a place where nature has been left to manage itself. Wilderness areas offer sanctuary not only for birds and animals, but for us too. It is a gift that provides us with a unique experience that we can’t replicate anywhere else.

It occurs to me that nature doesn’t love or hate, it is simply indifferent. It doesn’t need us but we certainly need it. River valleys not only provide wildlife habitat and sanctuary, but are also indicators of how well our ecosystems are doing. Whether we realize it or not, like the Niitsítapi, we too are dependent upon rivers for our continued survival because all living things in nature are interconnected. We can’t replace or improve upon nature, so we must protect and safeguard it, not only for ourselves, but for future generations. For as the ancient First Nations proverb states - "We do not inherit the earth from our ancestors, we borrow it from our children."

I don't think Na’pi would have it any other way.