The sound of my own voice surprises me. I mean - who died and made me sheriff?

“Not even apple?” asks a voice from inside the car.

By throwing food from their car, they are obviously ignoring the signs posted all over the park advising visitors that its illegal to feed wildlife. Perhaps they don’t understand the problems that habituating wildlife to people creates.

They take another I-Pad photo of the black bear sitting a short distance away, and drive off.

I’m sitting in the pullout at Vermillion Pass where it straddles the continental divide and marks the boundary between Banff and Kootenay National Parks. The black bear is enjoying its “all you can eat” dandelion salad in the late day sun. It’s been raining steadily for the last two days and I’m enjoying the sun too, but a quick glance at the clouds tells me it wont last long. 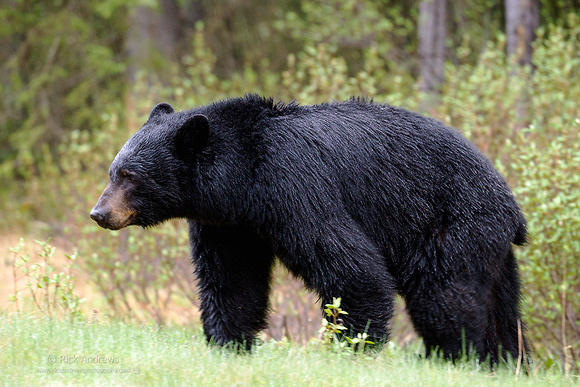 Next morning the rain is back and the clouds are now so low they’re touching the tree tops in the valley. Banff feels more like a temperate rainforest than a mountain setting. It’s very early morning and I’m photographing a soggy looking male black bear. Like a huge dog emerging from a swim in the lake, he pauses to give himself a good shake, then resumes browsing through the soddened vegetation. Then his demeanour changes, and out of the corner of my eye I see another black bear about 30 meters away, staring intently. Suddenly it charges the first bear and I’m awed by its acceleration and shear speed. I try to capture a burst of frames as it flashes by, but I know that even with a wide open aperture, the ISO is too high and the shutter speed too slow to capture anything worthwhile in this light. But I have to try. When I look up again the first bear is gone.

This is now the 15th black bear I’ve seen in the past 48 hours. All of them have been black, tomorrow I’ll see two more, a sow and yearling cub, both of which will be brown phase black bears.

They are feeding in a tree, but after deciding the ones on the other side of the road look more inviting, they climb down and cross the road. Within minutes the road is completely blocked by cars, RV’s and tour buses as people scramble to take pictures with their cell phones, tablets and cameras. It’s time to go. As I push my way through the crowd I’m happy to see two rangers arrive to begin dispersing the crowd. I understand the excitement that seeing bears creates, I feel it too, but wildlife need their space. 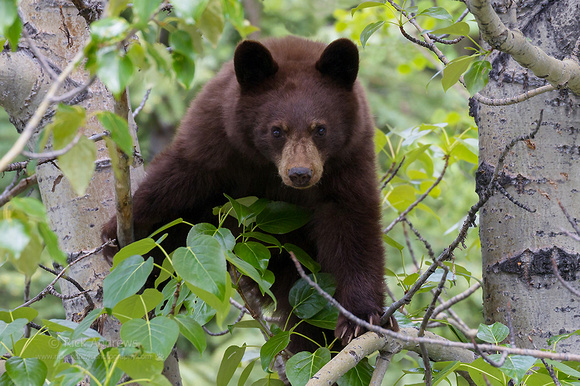 BlackBear-8446A brown-phase Black Bear (Ursus americanus) cub looks down from its perch in a tree where it is has been feeding. Image taken in Jasper NP, Alberta, Canada.

Although I’ve seen more black bears than I expected, I also came to the mountains hoping to see grizzlies too, but so far I haven’t seen any. Many places have now been closed temporarily by Parks Canada, including the popular Vermillion Lakes road in Banff. In the adjoining Kootenay National Park, a “no stopping zone” has been imposed on highway 93 for 11 km north of Radium Hot Springs. Parks Canada are trying their best to give them that space.

Two years ago, together with my son Scott, we saw 7 grizzlies in the same day. I remember telling him that was very unusual, I had never seen 7 grizzlies in one day before, or since. Today I would settle for just one, and wonder if my "grizzly luck" is running out, or if perhaps Scott is really my good luck charm. Time to don my lucky cap and try again.

Two more days go by and still no sign of a grizzly. I’m now in Jasper where the roads are already crawling with RV’s and tour buses even before the town’s motels have their hanging baskets out. It’s getting claustrophobic.

I put out some feelers and hear that during the last week, grizzlies have been spotted in a number of locations in both Banff and Jasper. I’ve already checked out some of the locations but as I look at the list again, I realize that many are at higher elevations. It appears the grizzlies are already heading to the high country, and who can blame them?

On the afternoon of my last day I head for a site that I think may offer the best opportunity, but just to be sure, I wear my lucky cap - backwards.

There peaking out of the bushes is the huge head of a female grizzly, she is wearing a radio collar and as I began to reposition myself to take my first shot of her, I notice another grizzly standing just behind her. Its a three year old cub almost as big as the mother. Both look to be in great shape. 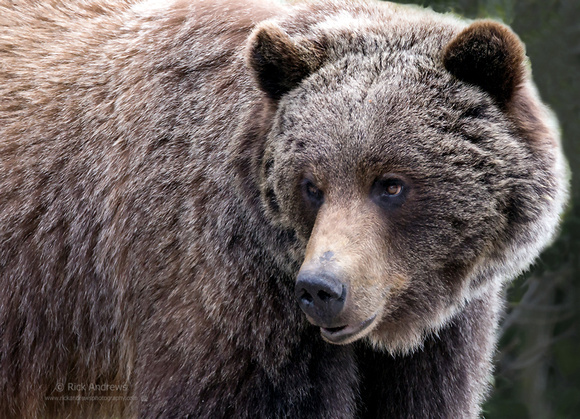 The mother looks at me from her position in the bushes, then after deciding I don't pose much of a threat, leads her cub out onto the road. For the next hour I watch and photograph them as they casually browse along the roadside. This is exactly the kind of encounter I had hoped for, an opportunity to watch these massive bears being themselves, in the high country, far from the craziness below. 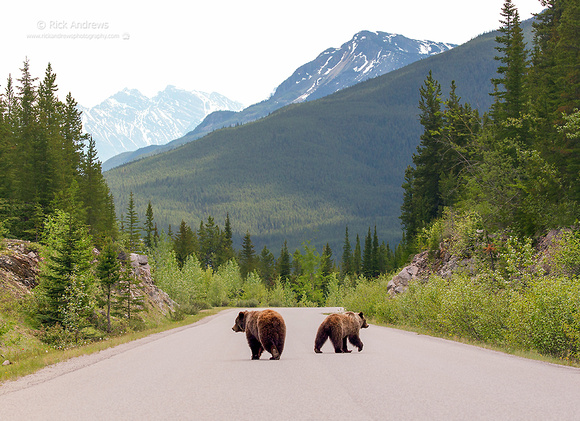 The rain has now ended and the sun is shining. The stars of the show always know exactly the right moment to make their entrance, and just as importantly, how to exit leaving me wanting more.

As I watch them walking down the road before re-entering the forest, I realize that this will likely be the last summer this cub will spend with its mother. At some point this year she will run him off, and he will then have to use all the skills she's taught him to survive. But he’s obviously doing well, and since he’s now almost full grown, I think his chances look pretty good.