“Sorry I can’t let you through” said the soldier in his distinctive French accent. “My orders are to let only red or green card holders through.” I look at ours - they’re purple. Laurence shows him the “Out of Area Pass” we were also given at range control a few minutes ago. The soldier is now clearly confused.

Following our early morning briefing in which the dangers of encountering live ammunition and unexploded artillery shells were explained to us, we were further advised that British, French and US troops, who were also present at CFB Wainwright, would be participating in exercises "designed to confuse them." Although we aren’t part of the exercise, it appears we have accomplished that anyway.

“OK you can go through” he said at length. “The other two vehicles behind are with us too” Laurence reminded him, the soldier nodded and walked ahead to raise the arm of the barricade.

Laurence, a member of the Wainwright Wildlife Society picked me up at my hotel at 4:30 am that morning, and along the way we met up with several other wildlife photographers until we now numbered ten. Although CFB Wainwright is located right on the edge of town, it was now already 5:35 a.m. and the eastern horizon was beginning to brighten significantly. Luckily the wildlife blinds from previous visits were left standing, and we were able to slip quietly into them just as the sun began peaking over the horizon.

I had driven to Wainwright in east central Alberta hoping for an opportunity to photograph sharp-tailed grouse. Although this particular species can be found throughout most of the prairie provinces, they require a piece of flat undisturbed ground (called a lek) on which to perform their annual mating dance. Since many of the leks throughout the province are located on private land, I decided to travel to Wainwright where the local Wildlife Society has been conducting these guided photo tours for more than 25 years.

As the sun rose quickly behind us, five or six male grouse suddenly flew in and landed on the frost covered ground in front of us. This was all quite new to me as the only times I’d seen sharp-tailed grouse before was after almost stepping on them, and they suddenly burst into the air in a flurry of heart stopping wing beats. Their speckled plumage of white, beige, tan, brown and black helps them blend invisibly into their secretive hiding places, but this morning they were about to become much more colorful. 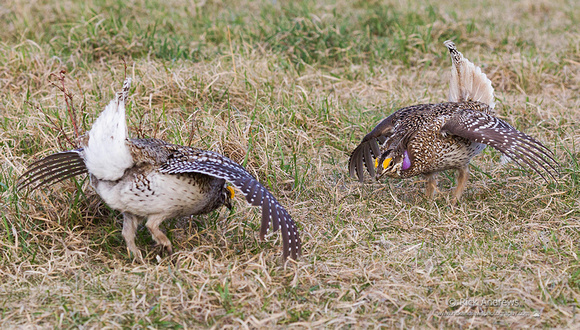 Males select hilltops and ridges for their leks in order to gain an unobstructed view of the other males, as well as any females or predators they may also attract. Flaring their bright yellow eye combs and inflating their purple neck sacks, their drab appearance was quickly transformed. With their heads tilted down and wings held out to the side, they stamped their feet rapidly while rattling their raised tail feathers. Then turning in tight circles like a child’s wind-up toy, they danced towards each other, before laying down beak-to-beak in what appeared to be some sort of “stare down.” 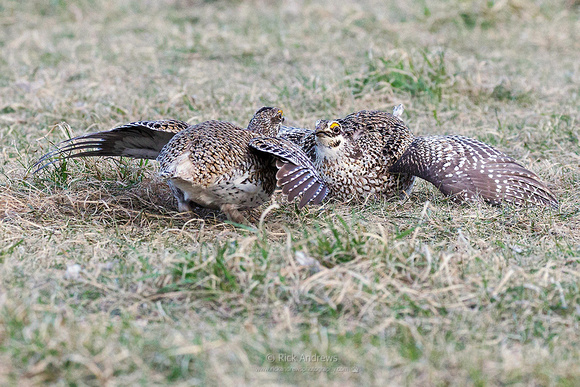 Occasionally one of the males would attempt to peck the other causing it to reel back or jump up flapping its stubby wings. The contest continued until one of the males appeared to lose interest, then waddled off before beginning the ritual all over again. 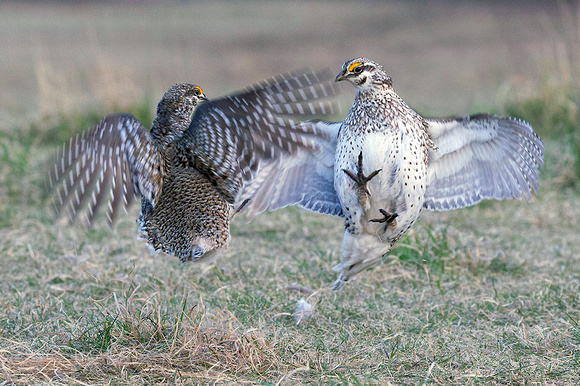 ShrpTailGrouse-2295Establishing the pecking order is an important part of seasonal mating dances for these sharp-tailed grouse (Tympanuchus phasianellus) as it not only establishes their dominance, but their right to mate as well.

A few years back I drove to Blackfoot Crossing to watch native dancers compete in the annual World Chicken Dance competition. Not to be confused with the chicken dance sometimes performed at hockey games during “TV time outs,” the Kitokipaaskaan dance is performed by Blackfoot First Nations competitors. Dressed in colorful and intricately detailed clothing, their dance is based upon the mating dances of the prairie chicken known to them as the “Fire Bird” because of its reliance on fire to maintain its open habitat. Since prairie chickens are now only found in the US mid-west, it wasn't clear to me if it really were prairie chicken's or perhaps sharp-tailed grouse that the Blackfoot dancers were emulating. But either way, watching these grouse now, I am amazed at how well the Blackfoot dancers were able to capture and replicate their movements.

Like all wildlife, sharp-tail grouse numbers fluctuate, but here at CFB Wainwright they are down to less than half of what they were only a few short years ago. “I don’t know why their numbers are down” said Laurence, “it may have something to do with the armies activities here, or hunting, or predators perhaps.” I suspect it could be a combination of all three.

The following morning our numbers are down too as now there were only four of us, so rather than returning to the military base, we drove an hour south of town to a lek located on community reserve land. It took Laurence two years to obtain permission for us to use it, but it pays off almost immediately as shortly after entering our portable pop-up blinds, we were joined by 12-15 male grouse.

This lek was situated on a small knoll of undisturbed short grass prairie, and since it lacked the stubby plants and taller grasses we encountered at the military base, we had an almost totally unobstructed view of the males as they began to dance. 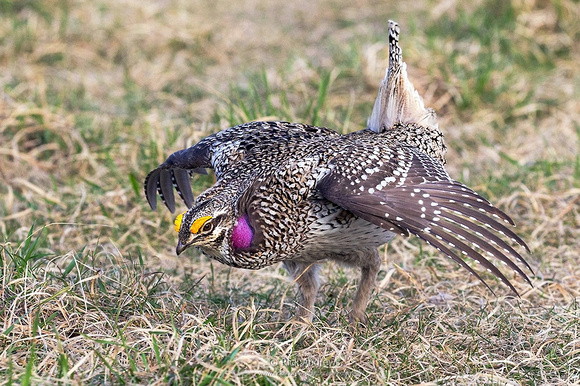 This flock was more active than the one we saw the day before, and I wondered if that was because there were more of them, and they needed to establish their "pecking order" quickly before the females arrived. With being a larger flock they also occupied more of the lek,  and some males came so close to the blind that I was even able to take a few full frame shots with my cell phone. A few minutes later, one landed on the roof of my blind, and I experienced first hand how loud their clucking and cooing calls are while sitting only a few inches away.

The Wainwright Wildlife Society charges only $15 per visit, which is a real bargain considering they also buy you breakfast too. I offer Laurence more money but he refuses it saying the society is doing OK. On the way home I think how lucky they are to have members like Laurence. Someone who volunteers his time to build, transport and store the blinds used at the base, and someone who’s determination and persistence in obtaining permission for us to access the community reserve lek is something I very much appreciated. I’ve always said I get to meet the nicest people through photography, and the past two days have been no exception.