The reynard is sitting about 20 meters from me growling softly. He is just beginning to shed his thick winter coat and looks a bit dishevelled. Although the rangefinder on my telephoto lens puts me at about 30 meters away from his den, I wondered if my presence may still be bothering him. Then as if to answer my question, he gets to his feet and begins trotting towards me.

I arrived at the den site earlier that morning and was already set up before noticing any activity. Although it’s almost mid May, this morning in Waterton Lakes National Park is cool and my car’s outside temperature reads only 4C. There is a thick dew on the grassland, and across the lake Vimmy Peak is obscured in low cloud. A cool breeze is blowing and although I’ve only been here a few minutes, I’m already wishing I was wearing my winter pants. I don’t blame the foxes for wanting to stay inside where they’re probably much warmer than I.

About a half hour later, I notice some activity as one of the kits pops its head out to take a quick look around, then just as suddenly, it retreats back inside again. A few minutes more and it emerges again, sitting at the entrance of the den, looking directly at me. Once comfortable with my presence, it emerges slowly and begins chewing on a long blade of dried grass. Then finding a twig on the ground, tosses it high into the air and gives chase as its carried a short distance on the morning breeze. 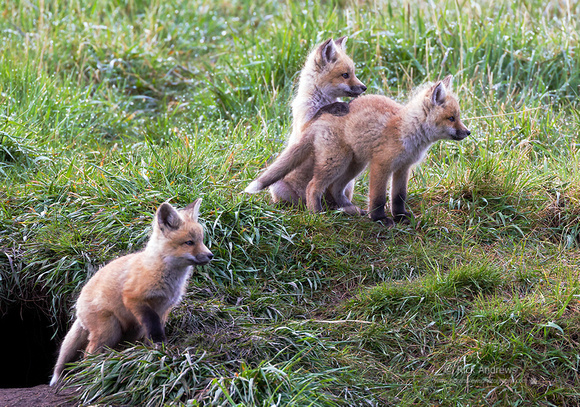 A few more minutes and another head pops up out of the den, then another, and another, until there are four of them. Three begin to play together, jumping and biting at each other in a rough and tumble game of tag, while the fourth sits by itself, seemingly content to watch the antics of its rambunctious siblings. After giving its ears a good scratch, it once more resumes its sitting position, and for the first time I sense some awkwardness in its movements. It appears to have a slight limp in one of its hind legs. 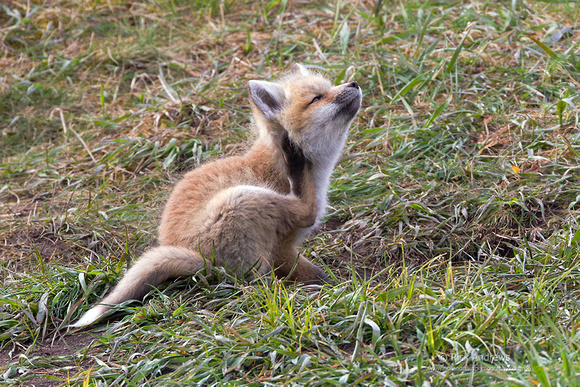 After a few more minutes however, one of its siblings comes bounding across the grass and immediately engages it in a game of tag. Now all four kits are biting, jumping and falling all over each other, and I can no longer tell them apart. Pausing briefly to watch a flock of magpies feeding noisily in the grass a short distance away, one of the kits jumps on the back of another and their games resume again. For the last hour they have remained close to the den, but now suddenly they break from that and begin running off to my left. I turn around to see that dad has just arrived with breakfast.

My lens is now way too long to fit them all into the frame, and it seems like its taking me forever to adjust to this new situation. The reynard is being mobbed as he drops his catch at the entrance of the den. Clearly the kits are happy to see him and content to let breakfast wait a while longer. Yet one appears to want to suckle, perhaps not fully understanding that this is its father, and that its mother will not be returning. 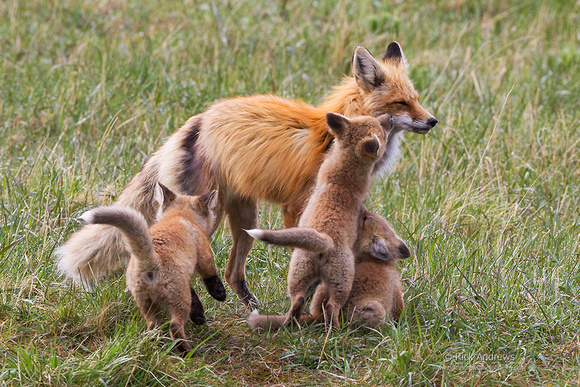 About two weeks ago, the vixen was found dead a short distance from the den, and since there were originally six kits, Parks Canada became concerned for their ongoing welfare. They tried live trapping them so they could be relocated to the Alberta Institute for Wildlife Conservation until they were old enough to fend for themselves. But I was told that after a few days, as it became clear the capture attempt was failing, the parks biologist decided the traps should be removed as the reynard now appeared to be bringing enough food to sustain his family. If this mornings hunt is any indication, he appears to be doing a stellar job.

The reynard now trots a short distance from the den accompanied at close quarters by three kits running closely alongside. Then realizing their sibling has now begun breakfast without them, they abandon him and quickly return to the den.

Sitting by himself about 20 meters away, the reynard looks at me, and still growling softly, gets to his feet and begins trotting towards me. Then without so much as a second glance, he trots right passed and disappears over the crest of a hill.

After watching him go, I look back towards the den. The kits have now finished eating and retired to its warmth to sleep off breakfast. Overhead, a bald eagle soars, and to my left a small flock of bighorn sheep casually walk by in single file. Once more all is quiet, and a light rain begins to fall.

At one point in my life I was a single parent too, so I fully understand the level of responsibility and the sustained effort this reynard will need to make to continue to support his family. Although these times were sometimes challenging for my sons and I, we succeeded, and today they are both doing well and helping raise families of their own. I wish no less for the reynard and his latchkey kits.