A Very Good Year for Owls

It’s late evening and I’m watching a pair of Great Horned owls sitting on the roof of an abandoned building in southern Alberta. The larger of the two is likely the female, slightly lighter in colour than her mate, she is looking around intently for any sign of prey.

To assist with her incredible eyesight, she also relies heavily on her hearing, which is aided in no small part by the shape of her round face. The concave facial feathers form a parabolic shaped disc that picks up sound in much the same way that a satellite dish captures and focuses signals. The sound waves are then directed towards her ears to help her pinpoint exactly where the sound is coming from. At certain frequencies, her hearing is ten times more sensitive than ours. 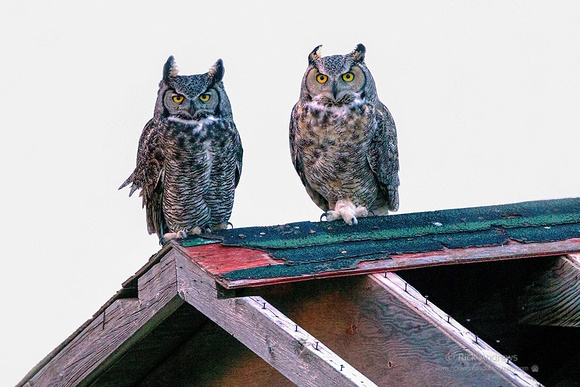 Another hunting advantage that owls have over other raptors is that their wings are very broad and generate more lift per wing beat, and since their flight feathers also have noise reducing fringes on both the leading and trailing edges, owls fly in absolute silence. They really are truly unique. “Raptors with character” as I sometimes like to think of them. Perhaps that’s why I find them so intriguing.

I saw my first owl of the year close to my home in southwestern Alberta in mid January. It was a female Snowy Owl that although well suited to the summer arctic environment, had migrated south to spend her winter hunting on the prairies. Like most raptors, “Snowies” are opportunistic hunters, and given the lack of trees here, we often see them perched atop power poles where they have a commanding view of the countryside below. With their bright yellow eyes and pure white feathers, they form a striking contrast against our clear blue winter skies. 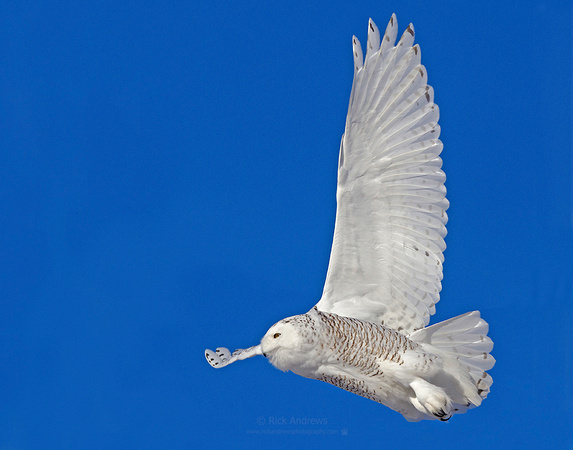 I saw my next owls during a wildlife photography workshop in Japan. We were on the northern island of Hokkaido, and after being held captive in our hotel for two days during one of the worst winter snowstorms in Hokkaido’s history, we ventured out to a location where our workshop guide Martin Bailey had heard a pair of Ural owls had recently been spotted. 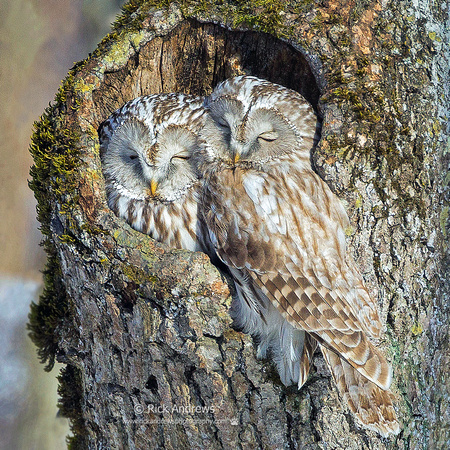 UralOwl-9097Ural Owls (Strix uralensis) are nocturnal raptors that during the day, can sometimes be found sleeping in hollow trees. Hokkaido, Japan.

The Ural owl nests in lowland deciduous forests, and though they seldom venture further south than the taiga, they can be found anywhere from Scandinavia to Japan. In appearance they resemble Tawny owls, although with a height of 50-60 cm (20-24 in) and a wingspan of 110-134 cm (43 - 53 in) they are much larger. Ural’s are nocturnal and prefer to nest in hollow tree trunks, which is exactly where we found this sleeping pair. As it turned out though, we saw not one, but two pairs of Ural’s that day, which created further excitement, along with additional photographic opportunities. 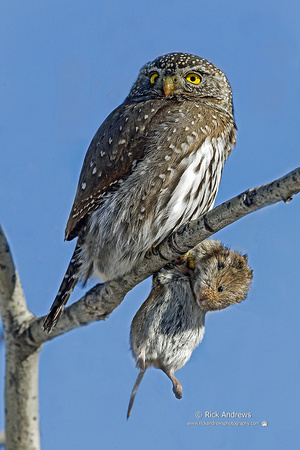 NrthrnPygmyOwl-1928The Northern Pygmy Owl (Glaucidium gnoma) is one of the smallest (about the size of a beer can) North American raptors, yet still plays an important role in maintaining rodent population size.

After returning from Japan my next owl encounter occurred on the southwest edge of Calgary where Pygmy owls had recently been spotted in nearby a Provincial park. As their name suggests, Pygmy owls are quite small, about the size of a beer can, yet despite their diminutive size, they are still very skilled hunters. I was fortunate to see this first hand when a Pygmy owl spotted a vole in the grass below, then dived from its perch to claim it. Completely enveloped by the grass, it quickly dispatched the vole, then struggled to fly the rodent, which probably weighed about as much as the owl, to the safety of a nearby, low hanging branch.

This looked like exhausting work for this little raptor, and even when fully rested there appeared little chance that it would be able to fly off with it. No the owl somehow needed to lighten the load. But raptors don’t excrete much in the way of solid waste, instead solids are collected in their stomach where they are transformed into pellets. I’ve never seen an owl regurgitate a pellet before, but this was something the Pygmy owl had to do in order to make room for its new meal. The vole however was still too much for the owl to consume in a single sitting, so after taking its fill, the vole now significantly reduced in size, was flown to a nearby tree and stashed for later snacking.

The fourth species of owl I spotted this year was the Great Grey, which is a non-migratory owl that lives in Canada’s boreal forest. I had never seen a Great Grey in its natural habitat before, but with general directions from some fellow wildlife photographers, I began my search in an area west of Calgary, where Canada’s boreal forest reaches its southernmost point. 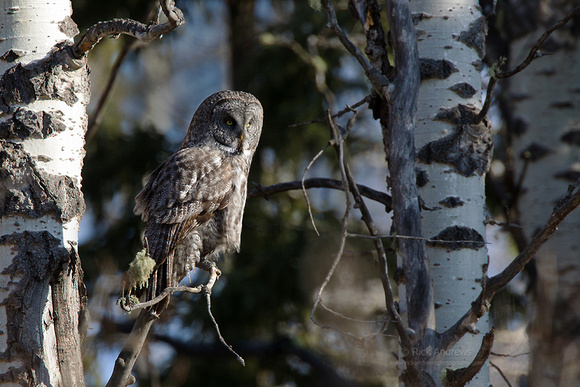 GreatGreyOwl-5451A great grey owl (Strix nebulosa) looks for prey from its perch in an aspen tree in Alberta's boreal forest.

While other owls may be heavier, the Great Grey is one of the largest owls in the world, averaging 72 cm (28 in) for females and 67 cm (26 in) for males. In winter it uses a technique known as "snow-plunging," where it combines its weight and speed to capture voles and mice moving about in tunnels at depths of up to 60 cm (2.0 ft) beneath the snow. Wow! How cool is that?

I really wanted to see one of these owls but, this was a pretty big area, and not knowing exactly where to look, or where to find them, I wasn’t sure how successful I would be. But as it turned out, it didn’t take long until I saw my first Great Grey, sitting on a fence post right beside the road. What an awesome bird they are! Once I understood the type of habitat they prefer for hunting, it became easier to spot them. The next morning, in my enthusiasm I was up and gone before sunrise, and over the next few days I was fortunate to see and photograph many more Great Greys.

Back at the abandoned building, the female Great Horned owl has spotted something and has flown off to investigate, the male however seems content to remain behind, perched comfortably on the roof. The sun has now set, painting the clouds to the west in beautiful shades of red and orange against which he is now perfectly silhouetted. Although its still only April, I can’t help thinking as I pack up and head for home, that it’s already been a very good year for owls.