The Grey Wolf: The Usual Suspect and Convenient Scapegoat.

It was about two hundred years ago that European’s first began settling the western United States. Believing this to be their divine manifest destiny, they used their rifles to clear the land of bears, wolves and bison, and military intervention and starvation to clear the land of its indigenous people. Cities, factories and transcontinental railways quickly sprung up and the land was ravaged for its natural resources without any consideration for the long term impact. It was theirs for the taking and nothing was going to stand in their way.

Although wolves were essentially extirpated through much of the lower 49 states during this process, in the mid nineties, amidst strong and at times vehement opposition from local area ranchers, wolves were successfully reintroduced into Yellowstone National Park. Ranchers in both Montana and Wyoming were outraged and the fairy tale fear mongering that first originated with their European ancestors now resumed again in earnest. “Wolves will kill all our livestock” cried the ranchers, “Wolves will kill all the elk” cried the hunters. Nothing, science would prove, could be further from the truth. 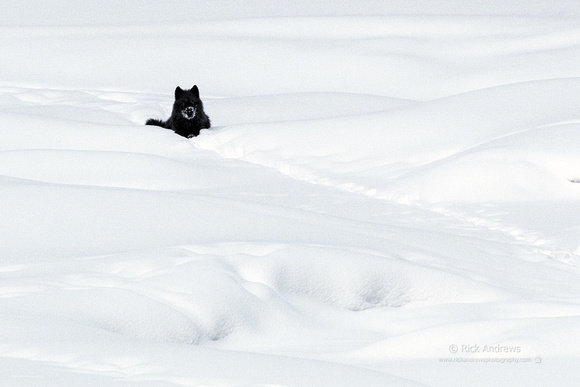 According to Dutcher & Dutcher (Hidden Life of Wolves, 152, 157) weather, disease, lambing complications and old age all combine for a greater percentage of sheep loss (48.4%) than predation by coyotes, bear, cougars, wolves, dogs and other predators combined (37.1%). In fact even amongst predators, wolves account for only 1% of sheep losses compared to coyotes with 25.3%. In 2011 they also cite US Department of Agriculture statistics that show that wolves killed 180 head of cattle in the states of Wyoming, Montana and Idaho, or one cow in every 33,666.

Statistics also show that elk populations rose and fell in the years immediately prior to the wolf reintroduction in Yellowstone. In fact in 1977 the parks elk population was just below 9,000 animals, that number grew to almost 19,000 by 1988 before falling again to just over 9,000 in 1992. (Smith, Decade of the Wolf. 198) But according to Doug Smith who's been part of the Yellowstone wolf reintroduction team since its inception, wolves have a far greater impact on elk behaviour than they do on population. And the recent scientific findings now commonly referred to as “trophic cascade”, support how valuable wolves are in restoring and maintaining the balance of nature. (see You Tube video)

Still through it all, the grey wolf has remained the usual suspect and a convenient scapegoat. Although our household dogs are directly descended from wolves and share much of its DNA, its an animal that a lot of people still love to hate.

In 2011, after several previous failed attempts, the US Congress was successful in removing the grey wolf from the Endangered Species Act. This was an unprecedented move, the first time any animal had been removed from the list by anyone other than scientists. It was done without any voting, quietly hidden away inside a federal budget bill, which also stated it was not subject to any judicial review. (Hidden Lives of Wolves. Dutcher & Dutcher. 161)

In transferring this federal jurisdiction back to the individual states, Idaho Fish and Game wasted no time in issuing over 43,000 wolf tags. A year later, Idaho’s original wolf population of 1000 was cut by half. In Montana it was pretty much the same story where the wolf population was cut from 566 to 336, and by 2013, Wyoming was poised to allow hunting of wolves in over 80% of the state, with no seasonal limits and no license required. (Hidden Lives of Wolves. Dutcher & Dutcher. 161)

As much as I would like to think otherwise, things are really not much different here in Canada. The Vancouver Sun reported in November of 2012 that a realtor in Fort St. John had initiated an annual wolf killing contest in which cash prizes between $150 and $1000 were handed out for the largest and smallest (no doubt a pup) wolves killed.

Then in January 2015, The Province newspaper reported that the BC Government had contracted hunters in helicopters to begin culling wolves in an attempt to save endangered caribou in the South Peace region of northern B.C., and the South Selkirk region along the Washington state and Idaho borders. These areas are home to dwindling caribou herds which the BC government insists can be protected and restored simply by culling the areas wolf population. The four year program will start this year by killing 184 wolves.

While its perhaps easy to get down on our US and BC neighbours, we are facing an identical situation right here in Alberta as our provincial government continues to use our hard earned tax dollars to fund the killing of wolves that it claims are responsible for the decline in the Little Smoky caribou herd.

The Little Smoky is a 2500-square kilometre area north of Hinton, Alberta, that is home to about 70 boreal woodland caribou. But like most other caribou in BC and Alberta, the Little Smoky herd has seen a marked decline in their numbers during the last few decades, and the Alberta government has concluded this is largely due to wolf predation, which according to a CBC news report has to date now funded the poisoning or shooting (from helicopters) of over 800 wolves.

A recent University of Alberta research study however points the finger elsewhere.

"The underlying issue is one of habitat loss which affects caribou... Wolf-control programs...do not provide a long-term solution to counter caribou declines. Studies in Alaska, the Yukon, and northern British Colombia have shown that this method resulted in only short-term increases in ungulate populations because wolf populations increased shortly after culling was ceased (e.g. Boertje et al. 1996, NRC 1997, Bergerud and Elliot 1998, Hayes et al. 2003). The management strategies currently in place have the potential to increase caribou survival if applied continuously but they do not address the main issue of habitat loss, habit degradation, and habitat fragmentation.” The extent of this problem becomes abundantly clear when one reads the Federal Government's own recovery strategy for boreal caribou, where its noted that a mere 5% of intact habitat is all that remains of the Little Smoky range.

The real cause of this habitat loss, degradation and fragmentation should more accurately be attributed to government approved industrial expansion within the Little Smoky. The removal of old-growth forest together with new growth in the cut-blocks has resulted in more ungulates such as moose, elk and deer frequenting this area which in turn has also led to the presence of more predators. So while no one is saying that wolves are the innocent victims in all this, the roads and seismic lines built within the last few decades for oil & gas exploration, well site construction, and logging, have all made it much easier for predators, including wolves, to access, live and successfully hunt in the Little Smoky caribou range.

Two hundred years ago, caribou could survive by simply moving to more remote, inaccessible areas, but today wildlife habitat everywhere has been so significantly reduced and destroyed, that they simply have nowhere else to go. Perhaps the same can now be said of the wolf.

Unfortunately there is no short term solution to this problem as CBC News recently reported that many of the province's top caribou scientists found that while the wolf cull has so far allowed the Little Smoky caribou herd to hang on, due to the significant extent of habitat destruction they estimate it will take another 30 years to recover, by which time both the caribou and wolves will all presumably be dead.

As a wildlife lover and photographer, as an Albertan and proud Canadian, it saddens me greatly to think of the loss of these animals, yet government everywhere appears only concerned with economic growth and jobs. While I agree that a flourishing economy is something we all want to see, I for one don't want that to come at the expense of this country's wildlife. It is simply not acceptable to me for our provincial government to continue to submit to the imposed pressures of major energy corporations, who in the end, will surely not only strip this land of its natural resources much more effectively and efficiently than our European ancestors every did, but in the process will also leave the people of this province and country, very much the poorer for it.