It’s shortly after 5 a.m. and I’m standing on the Otawa Bridge (Sound of Wings Bridge) above the Setsuri River where it flows through the village of Tsurui on the island of Hokkaido, Japan. Within a few minutes there will be as many as 40 or 50 other wildlife photographer’s here, some of whom staked out their spot by leaving their tripods set out all night. We are here to see one of the rarest sites in the world. To the Ainu, the indigenous people of Japan, it is known as Sarurun Kamuy, "the god of the marsh,” and to today’s Japanese people as the tanchōzuru, “red head.” To the rest of the world it is known as the Red-crowned crane, Grus Japonensis, one of rarest cranes in the world today. 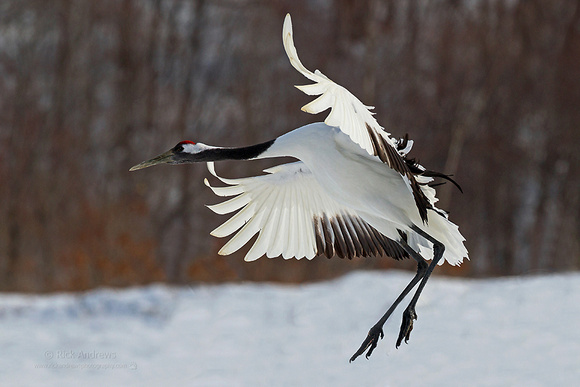 RedCrwnCrane-6824Appearing in literature, poetry, art and folklore, the Red-crowned Crane (Grus japonensis) is a national symbol woven into the very fabric of Japanese culture. Cranes are monogamous and are said to live for a 1000 years. They are revered as symbols of fidelity and longevity and are therefore often featured on the back of traditional Japanese wedding kimonos. Their likeness also appears on the 1984 1000 yen note and on the tail of every Japan Airlines aircraft.

Appearing in Japanese literature, poetry, art and folklore, the Red-crowned crane is a national symbol that is woven into the fabric of Japanese culture. Cranes are monogamous and are said to live for 1000 years and therefore revered as symbols of fidelity and longevity. Its likeness appears on the 1984 1000 yen note, on the tail of every Japan Airlines aircraft, and it's often featured on the back of traditional Japanese wedding kimonos.

The ancient legend of Tsuru no Ongaeshi ("crane's return of a favor") promises that anyone who folds a thousand origami paper cranes (senbazuru) will be granted a wish by a crane. A traditional senbazuru wedding gift is given by a father wishing a thousand years of happiness and prosperity upon the wedding couple. They can also be given to a new baby for long life and good luck, or to people who are injured or sick. Hanging them in one's home is believed to be a powerfully lucky and benevolent charm. It’s ironic therefore that there are so few Red-crowned cranes left in the world today, that most Japanese people have likely never actually seen one.

From the Edo period (1603-1868) to the Meiji period (1868-1912) there were no restrictions on hunting in Japan which together with the destruction of its habitat left many believing the cranes had become extinct. But in 1924, a few mating pairs were discovered in eastern Hokkaido and the Government of Japan moved quickly to designate both the crane and its habitat as special natural treasures.

As dawn begins to break, I set my camera to a long exposure and on its LCD screen I see cranes roosting on the river long before I can see them with the naked eye. This morning we were hoping for clear skies and cold temperatures to add mist to the river and hoar frost to the trees on either side, but this night was too warm, and the effect is seen only fleetingly along one side. But as the light improves, I still manage a few shots as a handful of cranes begin foraging in the shallows below me. 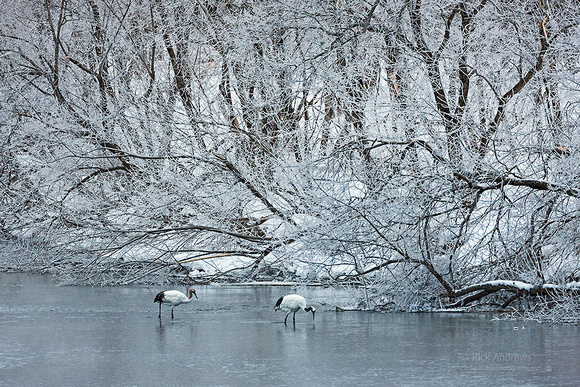 Back at the Tancho Observation Center, there are perhaps two hundred cranes assembled in the open field awaiting their 2pm feeding. The feeding began here in 1950 when Sadajiro Yamazaki, the farmer who owned this land, saw a solitary crane searching for food around a pile of dried corn plant. He began leaving corn grain out for the wary bird, which eventually began feeding on it. There were then perhaps only a few dozen mating pairs left in Japan, today their numbers are still small, but now estimated to be closer to 1500 birds.

Given their largely carnivorous diet, together with their tiny remaining wetland habitat, some artificial feeding is still needed to sustain them in natural winter conditions. But the daily feeding also attracts other birds and mammals. Overhead I watch a Black Kite circling, while across the field I can see white-tailed eagles perched in the trees. There are also dozens of crows and whooper swans that are moved on periodically by staff driving a snowmobile around the perimeter of the field. Crane numbers are still so small that it’s feared they could be wiped should they contract a disease such as avian flu.

On this day a few of us also spot an Ezo fox as its steals across the field, looking for a free handout it slinks right through the middle of the cranes. In the spring when they are incubating their eggs, they will be much less tolerant and drive it away with multiple jabs from their beaks, but today the cranes seem indifferent to its presence.

It's here I discover the cranes derive their name from a little patch of red that stretches from their forehead to the back of their heads. But a closer look reveals that this isn’t a patch of red feathers, but actually exposed skin that turns red when the birds become agitated or excited. Standing on average 1.5 meters (5 ft) tall and with a wingspan of up to 2.5 meters (8 ft), these birds are also amongst the largest cranes in the world.

We are here in early February at the beginning of mating season, and we watch as pairs begin their mating rituals by throwing back their heads while calling and strutting around together. This is sometimes followed by a mating dance, that consistent with Japanese culture, begins with the cranes bowing to each other. They then spread their wings and leap 2 meters or more into the air. Sometimes this sets off more dancing by other mating pairs, and on more than one occasion I saw a juvenile that after picking up a feather or piece of snow in its beak, began leaping high into the air while performing its own solitary dance. 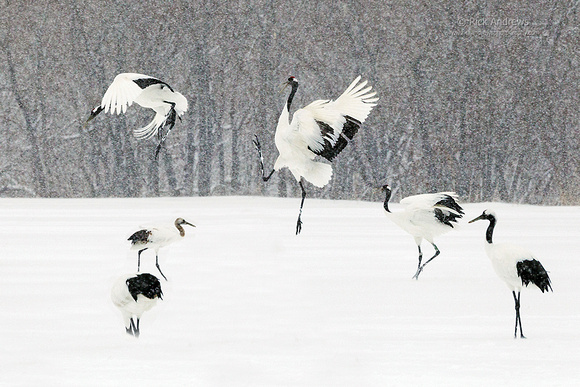 On our final day at the Crane Center the wind is howling and it's snowing heavily. While this covers the field in a fresh blanket of snow it also creates additional challenges for photography as camera gear quickly begins icing up and snow accumulates inside the lens hood. But this also creates a new magical photographic canvas, one that can be used to great advantage in capturing a few creative images, so I'm reluctant to pack up and go just yet. 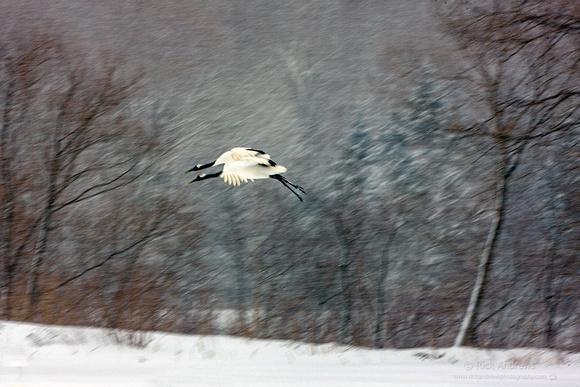 RedCrwnCrane-8007A pair of Red-crowned Cranes (Grus japonensis) glide in to take shelter from a winter blizzard in Kushiro, Japan.

Tomorrow we’ll wait out the winter storm that will last for three days and dump a record 1.8 meters (6ft) of snow on Rausu, closing all roads in and out of the town. The snowstorm also serves to remind us of the harsh climate these birds face, since they are now resident, and no longer migrate to warmer winter climates. But I’m grateful for the opportunity to have learned a little about these magnificent birds and for the opportunity of spending a few days observing and photographing them. And as the roads are cleared and reopened allowing us to head off to Rausu, I wish these iconic birds well and hope that with a little more help, they will endure and their numbers will continue to increase.