Thousands of years ago, a tribe of macaques (Macaca fuscata) made an incredible journey, crossing mountain ranges and snow filled valleys they eventually settled in Jigokudani (Hell Valley), and other than humankind, became the northernmost primates on earth. Today their descendants still roam the mountains of central Japan.

About 50 years ago, or so the story goes, a group of young rambunctious macaques began stealing quick dips in the outdoor hot springs at the Korokan Inn. To prevent them from becoming a nuisance, the inn eventually built them their own hot springs pool a little further up the valley, where they were often seen bathing while freshly falling snow accumulated on their heads. Known locally as Nihonzaru, these Japanese "Snow Monkeys" quickly became a novelty, then international celebrities, and today they are amongst the most photographed animals in the world.

SnowMonkey-5000Grooming for these Japanese macaques (Macaca fuscata) is not only important for good hygiene but its also used for bonding and socializing within the troupe. Jigokudani, Honshu, Japan.

In spring and summer, the “Hot Springs Troupe” as they have become known, feed on fresh plants and leaves and add protein to their diets by eating insects and larva found hidden beneath the bark of the valleys cedar trees. Spring is also the time that females give birth to a single infant. Their gestation period is about 180 days, and while females only give birth every second year, each female will have about ten babies during her lifetime.

The macaque society is a matriarchal one with the dominant females deciding who the alpha male will be each year. Females remain with their original troupe throughout their lives, so it is not uncommon for a troupe to contain several families each comprised of grandmothers, aunts, cousins, sisters and offspring. Each family remains close-knit, often eating and sleeping together, grooming each other, and protecting each other during troupe spats and conflict. Grooming is an important and ongoing social activity that is performed by family members, which in addition to providing free snacks and good hygiene, also helps promote family bonding.

While Mothers develop a strong bond with their babies (who inherit their mother’s social standing in the troupe) Father’s have no relationship with their offspring at all. Unlike the females, most males usually leave their home troupe before reaching sexual maturity, some however will remain to help safeguard and protect it from rival troupes and predators.

Males that do leave their home troupe, roam alone until mating season when they will try approaching females from another troupe. This is always a risky business, because while it may be good for the troupes gene pool, they are not received well by the resident males. On occasion however, if they are persistent they may be accepted by the troupe and eventually become resident males too. But this may be short lived as most males will join and leave several troupes throughout their lifetime.

Winter is the true test of most mammals, and as I experienced during my recent visit to Japan, storms can last several days, in fact more snow falls on the Japanese Alps than almost anywhere else on earth. Macaques therefore rely heavily on each other for survival, clinging closely together in the trees overhead, or huddling together over geothermal steam vents to stay warm. 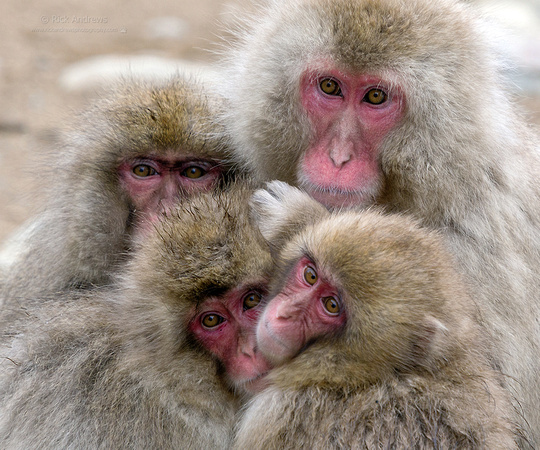 SnowMonkey-5451Japanese macaque's (Macaca fuscata) or Snow Monkey's as they are sometimes known, huddle for warmth in Jigokudani, Honshu, Japan.

The winter diet of the Hot Springs troupe consists of young branches, buds and tree bark supplemented with grain that is scattered widely on top of the snow on each side of the river. Not having to spend as much time foraging, these macaques lead a more comfortable life and have a lower mortality rate than other troupes further down the valley.

Dr Takayo Soma of Kyoto University is a primatologist who has studied primates for over 10 years. In the Kamikochi Valley in the heart of Japan’s Chubu Sangaku National Park, she discovered that primate life revolves around the Azusa River, and that macaques there lead a more hand to mouth existence. In fact one of the first striking discoveries made by Dr. Soma, was that the “Mountain Troupe” macaques were on average only half the size of the Hot Springs Troupe. This she thought is likely due to the troupe's need to spend a large part of its day foraging for food, while covering many kilometres in the process. Also largely attributable to the challenging life this troupe leads, these females only give birth every two to three years.

Thirty years ago, it was unusual to see macaques outside of the valley, but today, a third troupe known as the “Urban Troupe” have begun regular excursions beyond it. But what used to be forest is now farmland and orchards, both of which provide easier food sources for hungry macaques.  In winter they content themselves by eating discarded corn cobs and raiding bags of rice husks, but during the growing season they openly raid food crops and orchards. Its perhaps ironic therefore that while the Hot Springs troupe are adored by their human visitors, raiding Urban Troupe macaques are leaving farmers frustrated and angry. Conflict between humans and animals typically never ends well for the animals, and in this instance farmers have begun building huge traps baited with fruit, and according to a BBC TV documentary [Natural World – Snow Monkeys of Japan (2009)] in this one small area of Japan, as many as 1500 macaques are killed each year as pests.

Back at the Hot Springs, I’m still fascinated by these primates. Although it’s unlikely we’ll ever know with certainty what these Snow Monkeys are actually thinking or feeling, it was difficult not to try to imagine. They are so engaging to watch, the exuberant antics of juveniles chasing and wrestling with each other, sedate mothers nursing their infants, and the seemingly blissful and sublime facial expressions of the closed-eyed bathing adults, all left me guessing.