I say it every year, but this year really will be hard to beat.

It all began in late January when I travelled to Japan to meet up with some Facebook friends in Fukushima Prefecture. Although we had never met in person before, their warmth, generosity and willingness to provide me with a glimpse into Japanese culture is something I very much appreciate and will cherish for ever. 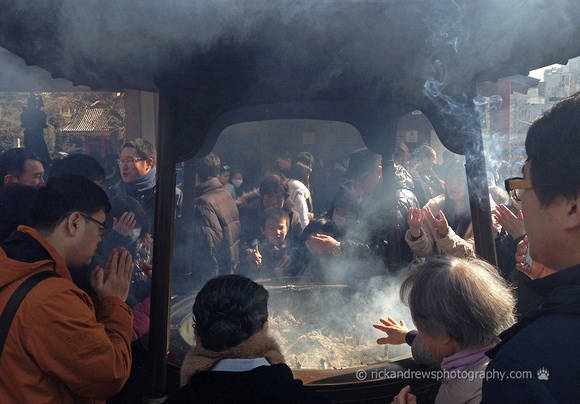 IMG_0439Visitors to the Main Hall bathe their hands and faces in smoke at the bronze incense burner as a charm to ward off illness.

From there I took the bullet train back to Tokyo Prefecture to join a winter wildlife tour led by Martin Bailey, a very talented and knowledgable photographer based in Tokyo. In the Japanese Alps outside of Nagano, we spent a few days photographing the adorable Japanese macaques or snow monkeys as they are perhaps more commonly known. Then it was off to catch our flight to the northern island of Hokkaido where we spent the rest of the tour photographing whooper swans, white-tailed and Steller’s sea eagles, along with the revered Japanese Red-crowned cranes.

Back home in Canada, once I’d gone through my shots, I was invited by Martin to participate in one of his weekly podcasts in which we discussed some of the images I’d taken during the tour. This was the first time I'd participated in a podcast, which was a lot of fun, so my thanks to Martin for the invitation to do that. 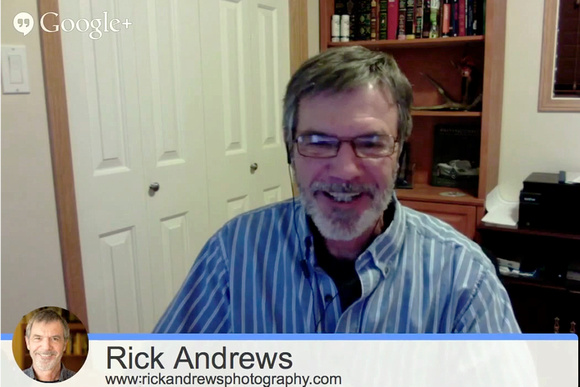 In late April I drove to Wainwright in east-central Alberta to photograph Sharp-tailed grouse. While they can be found throughout much of Alberta, I decided my chances of photographing their mating dance would be greatly improved by participating in one of the Wainwright Wildlife Society tours which they have been hosting for the past 25 years.  Although each day began promptly at 4:30 am, it was well worth the early start as each morning provided great opportunities to photograph the males at very close range, and in beautiful warm light.

As spring arrived, I was kept busy photographing the northern migration of thousands of snow geese, swans, shore birds and waterfowl, many of which nest in southern Alberta’s lakes and wetlands. Then as spring began to draw to a close, I travelled to the mountain parks to photograph bears that had recently emerged from winter hibernation. Most were black bears, yet despite their name, I found them in just about every shade from cinnamon to pure black. Although I was a little disappointed that I hadn’t seen any grizzlies, my patience eventually paid off and on my very last day I found a sow and her two year old cub in a remote alpine area of Jasper. 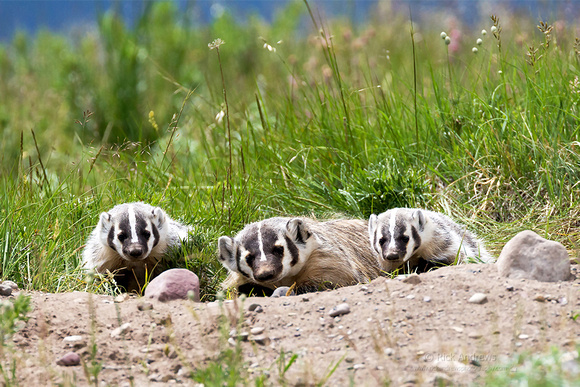 Badger-9380American Badgers (Taxidea taxus) are normally nocturnal, but in spring, mothers will often hunt during the day so she can spend her nights with her young. Image taken in Waterton Lakes NP, Alberta, Canada.

As summer arrived in the mountains, I discovered two fox dens along with a badger den, both of which provided great opportunities to photograph the adults with their young. Then as the mountain parks began to fill with tour buses and motorhomes, I stayed closer to home, photographing songbirds, owls, pelicans, rattlesnakes and garter snakes all of which made interesting subjects and kept me busy throughout the hot summer months.

At the invitation of the Oldman Watershed Council, I also did some “behind the scenes” photography for a feature film they are currently producing to draw attention to watershed use and the impact that has on people living downstream. The first part of this assignment was photographing interviews of Niitsitapi people living on the Kainai Reserve, while the second involved shooting aerial video footage of the Oldman River, from Lethbridge all the way to its headwaters at Dutch Creek on the eastern slopes of the Canadian Rockies. Both of these were great experiences, and I'd like to give a special shout out to the Oldman Watershed Council for providing me with these great opportunities.

As the days began to cool and leaves began changing colour, I headed to central Saskatchewan in the hopes of photographing sandhill cranes as they migrated from the arctic to spend their winter in warmer climes. Although I did find several hundred, they remained very aloof and challenging to photograph, with the only real opportunities coming as they flew by overhead. 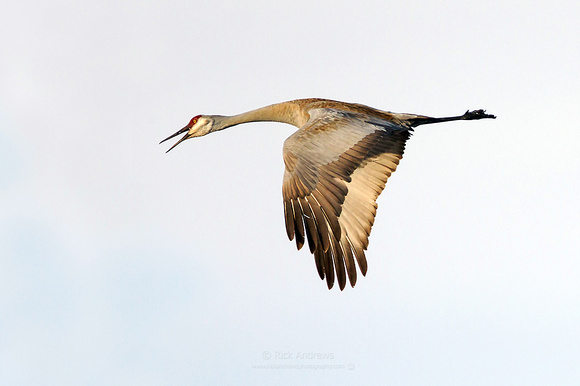 SandHillCrane-4525Early morning sunlight reflects off the feathers of this Sandhill Crane (Grus Canadensis) flying across the sky of southwestern Alberta, Canada.

In early November, together with my buddy Tom we took the train to Churchill, Manitoba to photograph polar bears. At this time of year, the bears congregate along the shoreline while waiting for Hudson Bay to freeze before heading out onto the sea ice to spend the winter hunting ringed seals. 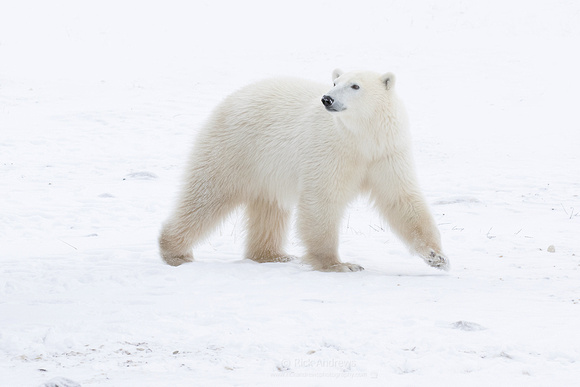 Along with the polar bears we also saw red foxes (including a dark-morph red fox known as a "silver fox") as well as spruce grouse and willow ptarmigan. It was a productive trip and a great way to round out the year, which as I said at the outset, will be really difficult to beat!

So now as the daylight hours begin to decrease with each passing day, and another year draws to a close, I want to thank you all for your visits to view my images, read my ramblings, and post your very kind comments. I hope each of you have a safe and happy holiday season, and wish you and your loved ones, good health and much happiness in 2016.

Patricia Polo(non-registered)
Thanks for sharing the extraordinary adventures you experienced during 2015. Your photos are extraordinary and beautiful. For me, the whole context has the stamp of your great sensitivity and your sharp observation by your environment. I must confess that I am too jealous. Great job.
Oldman Watershed Council(non-registered)
Thank you for the shout out, your 2016 wishes and all you do for watershed awareness via the beautiful photos of the wild beings we share our home with.
Oldman Watershed Council(non-registered)
Thank you for the shoutout and your hard work on our behalf, Rick! The photo from Japan looks like an Old Master's painting! Gorgeous!
No comments posted.
Loading...
Subscribe
RSS
Recent Posts
Wildlife Photography for the Greater Good Responsible Wildlife Photography 2018 - Year in Review Coastal Wolves KEPA Summit 2018 Wildlife of the Oldman River Documentary Film Update Kenow Fire - More Questions than Answers BC Government to end Trophy Hunting - Sort of Alaskan Coastal Brown Bears Wildlife of the Oldman River Documentary Film
Keywords
Canada Rick Andrews Wildlife Photography Alberta Wildlife Avian Wildlife Rick Andrews Nature & Wildlife Photography British Columbia Oldman River Valley Great Bear Rainforest mammal
Archive
January February March April May June July August September October November December
© 2010-2019 Rick Andrews Photography
Powered by ZENFOLIO User Agreement
Cancel
Continue