Trail of the Ice Bear

It's been quite an adventure, and the train ride from Churchill back to Winnipeg is a welcome change of pace. My adventure began 11 days ago when my buddy Tom Williams and I drove out from Alberta in his vintage 1985 Saab 900 turbo. Although it now has over 300,000 miles on it, it's a bit like like the energizer bunny, it just keeps going and going and going.

After arriving in Winnipeg, we boarded the train that took two days and two nights to cover the 1600 km (1000 miles) distance between Winnipeg and the town of Churchill which is situated on the sub-arctic western shores of Hudson Bay. To say it's remote is an understatement as it can only be reached by air or rail. But it's also geographically unique too as it's located at the transition between the boreal forest, the tundra and the ocean.

As remote as it is, Churchill is perhaps the most southern region in the world to see polar bears. Since their population here is estimated to be less than 1000, they are classified as “threatened” under the Endangered Species Act.

On our arrival we were happy too see that Hudson Bay was still ice free. During the winter months, polar bears hunt ringed seals out on the frozen sea ice, but in the weeks leading up to it, they can often be found sleeping, or patrolling the shores of the Bay. This is exactly what we’ve travelled so far to see and photograph. 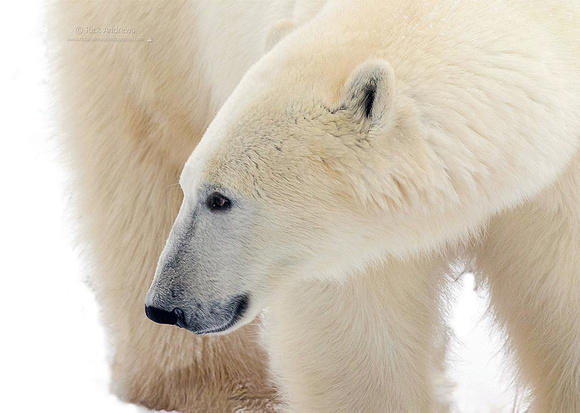 Sows with young cubs have to be especially careful at this time of year, as given the opportunity, male polar bears will not hesitate to kill a cub. Unfortunately the first bear we encountered was a large male guarding the carcass of a recently killed cub. Perhaps this was the cub of a first-time mother, or perhaps it was simply a surprise encounter. Either way, predation is hard to witness, and serves as a stark reminder that these are not cuddly teddy bears, but the largest terrestrial predators on the planet.

Over the next few days we had several more sightings of sows with cubs, all of whom remained dutifully close to mamma. Staying close not only improves the cubs odds of survival now, but also provides them with the opportunity to learn everything they can from her in the 2 or 3 years they will remain together. This in turn will improve the cubs long term chances of survival too. 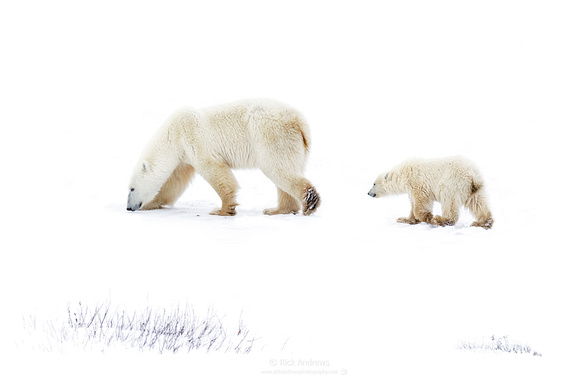 Having rented a 4 x 4 truck, we were able to travel roads paralleling the shoreline to gain access to many more bears. But we also travelled other roads where we found several red foxes, along with a silver fox, which was an exciting “first” for me. A little further out of Churchill, we ventured down yet another road that led into the Boreal Forest. There we found willow ptarmigan and spruce grouse, along with several relatively fresh wolf tracks. The wolves themselves however, remained elusive. 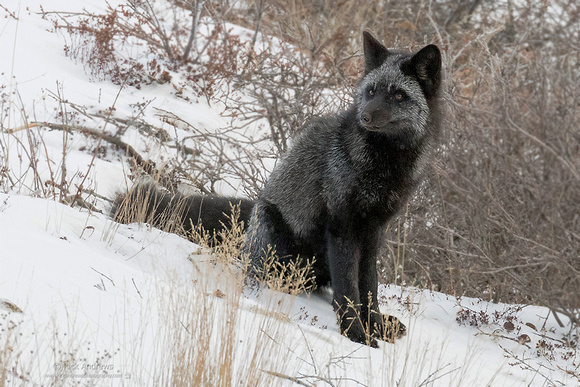 SilverFox-8471This silver fox (Vulpes vulpes) seen near Churchill, Manitoba, is a dark morph (melanistic) red fox, that comprises only about 8% of the total red fox population in North America.

The truck was great, but to gain off-road access to the bears, we decided to spend a day on a Tundra Buggy that took us into areas that are otherwise inaccessible. There we saw several male bears, and several mothers with cubs. We also saw one very large male looking very comfortable as he lay in a kelp bed on the frozen shoreline. With a missing ear and many scars clearly visible on his head and nose, he had no doubt seen his fair share of fights. So we watched with interest as two younger males approached him, to see if perhaps there would be a challenge, but once they saw him they both gave him a wide berth, perhaps deciding that discretion is still the better part of valour. 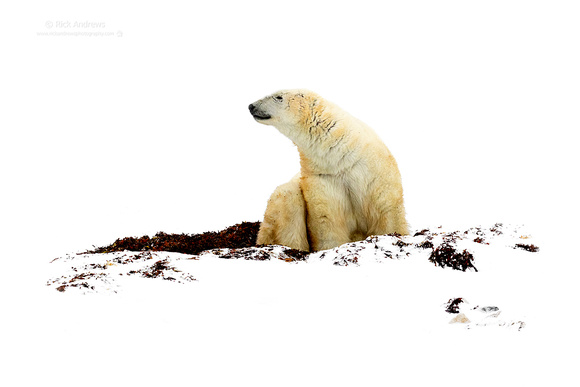 The Old WarriorSitting in a bed of kelp near Churchill, Manitoba, the head and nose of this male polar bear (Ursus maritimus) were covered in battle scars, and since he was also missing an ear, I dubbed him the Old Warrior. Although there were other males in the area, all of them gave him a very wide berth.

Our time in Churchill went by very quickly, and on our last day we noticed the tide was bringing in chunks of sea ice and depositing them along the shoreline. A little further out beyond the breaking waves, the presence of grease ice was also clearly visible on the surface of the Bay. Both of these natural occurrences are indicators that it won't be long now before the Bay freezes completely, and the bears will leave to spend their winter hunting on the ice.

But sadly we're leaving too, and with our gear safely stored, we settle in for the two day train ride back to Winnipeg. It’s been a great week, but an exhausting one. Tonight as I climb into bed, well fed and toasty warm, it feels wonderful just to let the gentle rocking of the train lull me into a deep and welcome sleep.