Earlier this month I spent a week or so in the Waterton-Glacier Peace Park that straddles the Canada-US border in southern Alberta and northern Montana. Although the environment is similar here, there are obvious differences between the two parks.

While Waterton is less commercialized than most other Canadian mountain parks, private businesses and residences are still permitted within its boundaries. Thankfully though, there are no shiny bright skywalks there yet, leaving me to believe that people are perhaps still attracted by its natural beauty, well-maintained trails, beautiful waterfalls and pristine mountain lakes.

By contrast, I think the American’s who originated and evolved the idea of preserving their natural spaces for the enjoyment of all, have done a much better job of creating their national parks than we have in Canada. For as American historian and Pulitzer Prize winning author Wallace Stegner so famously wrote, it’s "the best idea we've ever had," and as I’ve stated previously in my blogs, on this issue I believe the Americans got it right. In Glacier you won’t find many privately owned motels, restaurants, coffee shops, gas stations or souvenir shops, instead you’ll find them just outside the park in places like St Mary and West Glacier, where personally I believe such amenities more rightly belong. 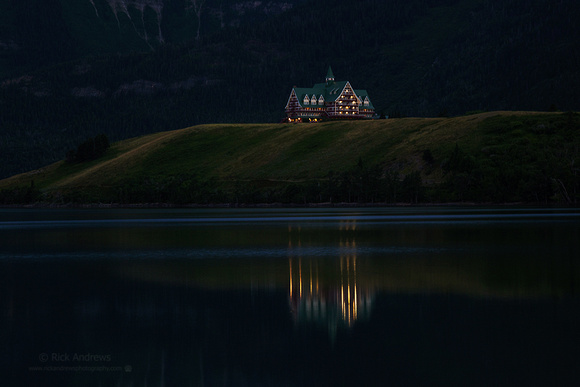 Waterton’s potential as a tourist destination was first realized by America’s Great Northern Railway which in 1926-7 constructed the iconic Prince of Wales hotel overlooking Waterton’s Emerald Bay. Built using a distinctly Swiss alpine architectural design, it became a drawing card used in the “See American First” campaign, designed to persuade middle-class American’s to forgo their European vacation in favour of staying home. To transport tourists to the Prince of Wales hotel from Goat Haunt, Montana, the GNR constructed the “MV International,” a 200 seat wooden boat that has been in service on Upper Waterton Lake since it was built there in 1927. Still sea worthy, I took the “International” from the Waterton townsite to Goat Haunt, before making the short hike into Kootenai Lake which I’d heard was one of the best places in either park to find moose. This tip turned out to be correct as within a few minutes of arriving there, I sat eating my lunch while watching a cow moose and her twin calves enjoying theirs a short distance away.

The following day I drove down to St Mary, Montana where I took in one of Glacier’s most interesting features - the 85 km (53 mile) long “Going-to-the-Sun” road. The road runs between St Mary at the east end of the park to West Glacier, crossing the continental divide at the 2026 m (6646 ft) Logan Pass. Built during the depression era, this civil engineering marvel used native rock to blend aesthetically and seamlessly into the mountainside along which it offers breathtaking views of the lakes and green valleys below, and the rugged and majestic snow-capped peaks above.

My goal in coming to Glacier this trip was mainly to photograph moose and mountain goats where luckily I found both. I had heard that along with Kootenai Lake, Fishercap Lake was also a good location to observe and photograph moose, and since it’s located not far from the Swiftcurrent Inn parking lot, it’s an easy hike even when carrying heavy photographic equipment. Again I wasn’t disappointed as over the next few days I saw several moose that came down to the lake to feed. In Addition I also saw several white-tailed deer, a young black bear and an adolescent grizzly that put in brief appearances there too. 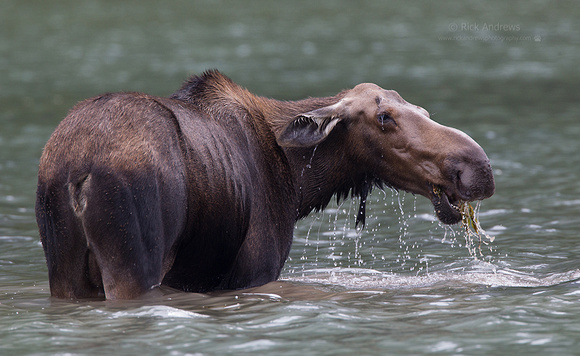 Moose-3426Once alpine lakes warm up sufficiently for plant life to begin regrowing in early summer, Moose (Alces alces) are often found browsing on these plants as they contain 500 times more sodium than those found on land. Image taken in Glacier NP, Montana, USA.

In my previous visits to the park I’ve usually had good luck photographing mountain goats in the Logan Pass area, but as I discovered shortly after arriving there this time, there is now a three year mountain goat research project currently underway. Aimed at studying the interaction between goats and humans, most goats were now wearing VHF radio or GPS collars. Given the expense of this equipment together with limited fiscal resources is perhaps the reason I also saw one goat that had been dyed with florescent orange stripes, presumably to help identify it as one of the study animals. Although I understand the importance of scientific study, I believe many visitors come to the park especially to see and enjoy wildlife that still look wild. Given the nature of the study, I found it a bit ironic that the only goats exhibiting signs of human interference were ones that had suffered it at the hands of the researchers themselves. Luckily I was able to find a few unmolested goats a short distance away that were either not included in the study, or had so far escaped the biologists dart gun. 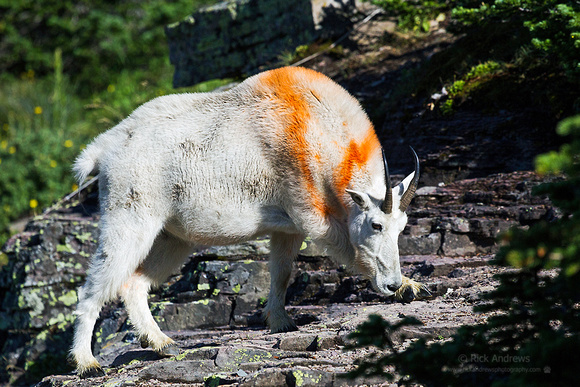 I spent my final day in the park along Avalanche Creek where a unique microclimate has helped create and sustain an old growth forest of western hemlock and western red cedar that are more commonly found in the Pacific Northwest. In fact this is the farthest east these 500 year old trees are found in the U.S., so it’s always a treat to visit and enjoy the sights, sounds and intoxicating aroma of this very special place. 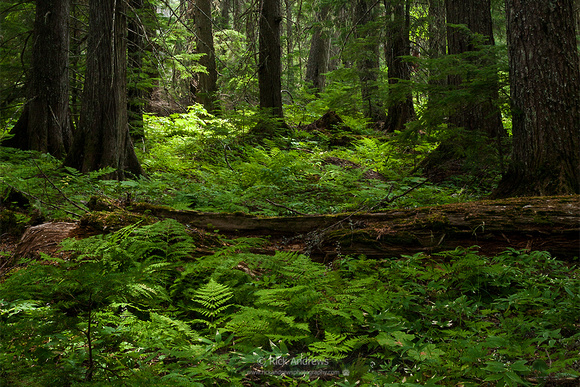 Along with the wildlife and natural beauty found in the park, I also met some interesting people. Glenn from Helena, and Patti from Portland are both fellow nature lovers and photographers I enjoyed chatting with as we photographed moose at Fishercap Lake together. Then while hiking up from Logan Pass to the Hidden Lake lookout, I met a dairy farmer from Madison, Wisconsin, whose daughter was getting married at the lookout that morning. I’ve always said you meet the nicest and most interesting people in the parks, and this trip was no exception.

Waterton and Glacier are very different parks, each with their own unique character. Both are great places to hike, explore and photograph, and without question, are places I'll continue to visit often.