Imagine that you’re walking down a woodland trail enjoying the early morning sunlight as it streams through the aspens, here and there illuminating the forest floor. White Admiral, Swallowtail and Northern Pearly-eye butterflies flutter about the sticky geranium, wild rose and cow parsnip. Small frogs, hidden under the vegetation jump about at your feet, and through the trees you can hear the melodic trills of red-winged blackbirds. Suddenly something catches your attention on the trail ahead, and you look up to see a huge bull bison standing there - completely blocking the trail - just staring at you. This was the dilemma I found myself in last week while hiking the 16 km trail around Flyingshot Lake in Elk Island National Park. As is saw it I had three choices, I could advance slowly in his direction to see if he would move out of the way, I could turn around and go back, or as Parks Canada recommend, I could take a wide berth around him rejoining the trail further up. I really had no desire to confront this behemoth by walking towards him, and since I was already five or six kilometres down the trail, I really didn’t want to turn back either. Yet after surveying the vegetation on either side of the trail, I discovered it was full of thorn bushes and dead-fall trees most of which were totally obscured by the dense ground cover. Trying to carry my camera, telephoto lens and tripod through all that didn’t seem like much of an option either – so now what?

The wood bison (Bison bison athabascae) is the largest land mammal in North America and once roamed the boreal forests of northwest Canada and Alaska. They were never as numerous as their cousin the plains bison (Bison bison) as according to Parks Canada even at their peak they likely numbered no more than about 170,000 animals. At first glance they look like any other bison, but a closer look reveals they differ in appearance from the plains bison in several ways - their hump is squarer with the high point located well ahead of the shoulders, their beards are thinner and more pointed, and the hair on their foreleg chaps is also shorter.

Perhaps in part through disease and over hunting, their numbers steadily declined until they became almost extinct, then in 1957 a small herd was discovered in a remote northwest region of Wood Buffalo National Park. To safeguard them against further loss, 18 animals were relocated to the Mackenzie Bison Sanctuary near Fort Providence in the Northwest Territories where today their population has grown to somewhere between 2,000 and 3,000 animals and now represents the largest free roaming wood bison herd in the world.

Then in 1965, to save them from an outbreak of anthrax, 23 animals were transported to Elk Island National Park where their numbers now exceed 200. As a result of these encouraging population resurgences, in 1988 the Committee on the Status of Endangered Wildlife in Canada (COSEWIC) revised their conservation status from "endangered" to "threatened."

As I stood looking at this huge bull while deciding what to do next, it suddenly occurred to me that there was a fourth option that I had already unwittingly adopted - perhaps I could simply wait him out! Although I had visions of him laying down on the trail and getting really comfortable, he continued to stand there staring at me. Turned slightly to his right, he was immense and perhaps like a bull elk displaying his freshly shined fall antlers, he was now trying to intimidate me by showing me just how big he really was. I remained still, and not wanting to provoke a confrontation, I looked away, and then down. After a few moments when I looked up again I saw that he hadn’t moved, and I began wondering how well this "fourth option" was really working.

Suddenly he turned away, and after completing a three hundred and sixty degree turn, he again stood facing me, this time turned slightly to his left. Perhaps he was now becoming a little impatient, wondering why I was still there - I began thinking it may be time to make a retreat. But then having made his point, and without warning, he slowly turned to his right and walked off into the trees. 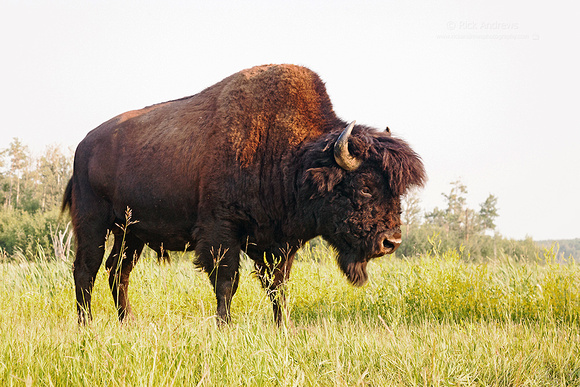 WoodBison-5461The Wood Bison (Bison bison athabascae), seen here in Elk Island NP, Alberta, Canada, differs in appearance from the Plains Bison (Bison bison bison) in a number of ways. Unlike the plains bison, the highest point of the wood bison is well ahead of its front legs, they also have larger horn cores, a darker and woollier pelage, and less hair on their forelegs and beard. Image taken in Elk Island NP, Alberta, Canada.

Cautiously I advanced up the trail until I reached the spot where he had been standing. Looking into the forest I saw no sign of him at all, he had seemingly vanished without a trace, and the only evidence I had that this wasn’t simply some kind of apparition was a few captured images on my memory card. Still perhaps the way he was able to literally disappear with such ease proves that this forest is indeed wood bison habitat, a place where these magnificent animals are truly at home, and will continue to be so as long as there are wildlife sanctuaries like Elk Island National Park.