Unlike Rome, where it's said all roads lead to, there are no roads leading to Nome - only three (Teller, Glacier and Kougarok) leading away from it. Just 164 miles from Siberia, with a population of 3500, Nome is remote and can only be accessed by air, by crossing the Bering Sea, or perhaps by crossing the frozen tundra in winter on a dogsled or snowmobile. But it’s the remoteness of Western Alaska that I found appealing, as once you’re out of Nome and travelling across the Seward Peninsula, there are no fence lines, transmission lines or rail lines, and other than a few widely scattered Iñupiat communities and hunting shacks, no human footprint whatsoever.

It was into this remoteness that I ventured earlier this month along with seven other wildlife photographers, to view, experience and photograph its wildlife, its beauty, and its shear wildness. June is a good month to experience this as the sun rises at 4:30 a.m. and doesn’t set until 1:30 a.m. the following day, the extended daylight hours thereby providing ample opportunity to see and photograph many of the migratory birds that come here to nest. It's a birder's dream come true with species such as Arctic Terns and Long-tailed Jaegers; American Golden, Pacific Golden, and Black-bellied Plovers; Yellow Wagtails, Red-breasted Mergansers, Tundra Swans; Pacific and Red-throated Loons; Arctic and Yellow Warbler's; Rock and Willow Ptarmigan; along with elusive Whimbrels, Bluethroat's, and the Spectacled Eider duck (pictured below). 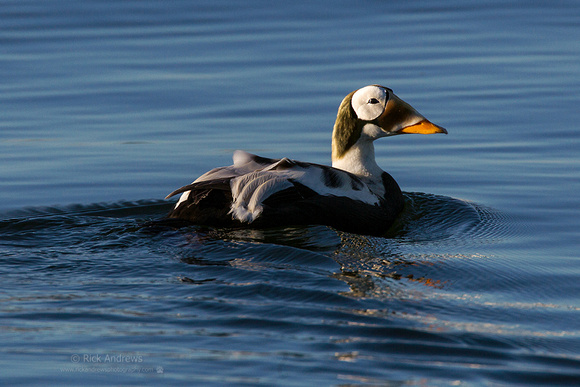 There is also an abundance of mammalian life here too, including the iconic Musk Ox which perhaps due in part to a combination of disease and over hunting, became extinct here in the early twentieth century. Fortunately they were successfully reintroduced by the US Fish and Wildlife Service sometime around 1935, and now seem to be doing well again. In fact they are doing so well that they now occasionally create problems for the locals when they're driven too close to town by predators. On those occasions close contact with working dogs can lead to the dogs being severely injured or killed, perhaps due in part to their close resemblance to wolves, which are a natural enemy of the Musk Ox. 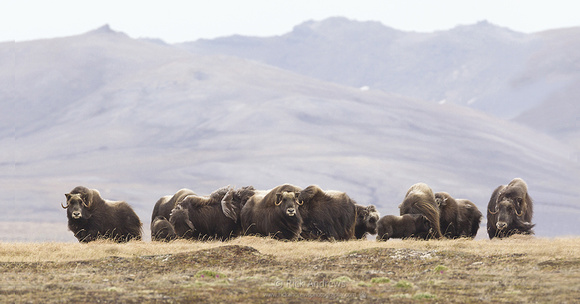 MuskOx-3937Musk Oxen (Ovibos moschatus) like this herd in Alaska, instinctively form a protective circle around their young whenever they sense or detect danger. Image taken on Seward Peninsula, Alaska.

We also saw a herd of Caribou that are not to be confused with domesticated herds known locally as "Reindeer." Although the Alaska department of Fish and Game estimate there are perhaps as many as 950,000 Caribou in Alaska, this was the only herd we saw, and since wild herds are hunted for food, this one appeared quite nervous of our presence, and maintained a healthy distance at all times.

Most days we also saw at least one moose, with a cow and two calves being the most we saw at a single time. Alaskan moose are one of the largest sub-species, standing over 7ft (2.1m) tall at the shoulder and weighing in around 1400 lbs (635 kg). Being that large they need to consume around 10,000 calories each day, and are therefore more often found singly, browsing in willow bushes where they appear to enjoy fresh green foliage and supple new shoots.

Our week there went by all too quickly and before we knew it, it was time to leave. In my all too brief visit, I found Western Alaska to be a profoundly beautiful and tranquil place that provided me with a valuable glimpse into what the rest of North America must have looked like before it became settled, farmed, industrialized and "tamed." It is perhaps one of the few remaining places in the world still in its natural state. It's a place to be valued and cherished, a place that will hopefully be preserved in tact for the appreciation and enjoyment of many more generations yet to come.