Sometimes when I talk to people who don’t live here on the prairies, they're surprised to hear that American White Pelicans are frequent visitors to our area, assuming instead that they're strictly coastal birds. Yet its not uncommon for pelicans to nest on the gravel bars in our rivers, or take up summer residence on our freshwater lakes.

I spent the few favourable spring-like days we had last week, observing a group of about two dozen pelicans that had camped on just such a gravel bar in the middle of the Oldman River. Their day began with 15 or 20 minutes of preening until every feather was exactly in the right place, after which they would waddle over to a new sunny spot and sit down. Then turning their heads 180 degrees, they rested their beaks on their back, and went back to sleep. 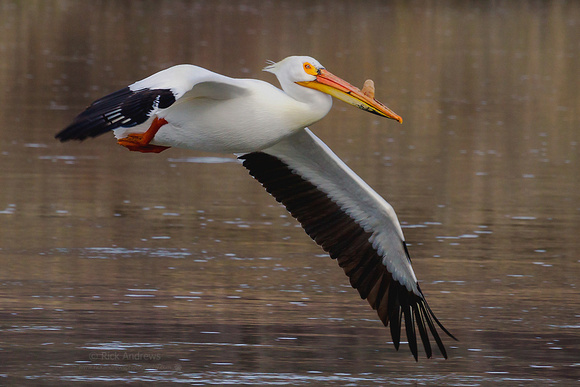 Around mid-morning, the pelicans became a little more active, and after preening themselves again, a group of about six birds entered the water before taking to the air. With wingtips skimming the surface, they flew side by side for about 800 metres upriver, touching down again at the weir adjacent to our local water treatment plant.

Although I’ve read and heard of pelicans working cooperatively together to fish, I had never seen it for myself until I had spent time watching this particular flock. After flying upriver, this small group slowly came into view again, drifting downstream shoulder to shoulder in a semi-circle formation, attempting to drive the fish before them.

Then with all the precision and grace of a synchronized swim team, they plunged their heads into the water until only their tails and webbed feet were visible above the surface. Then just as gracefully, they lifted their heads out of the water and righted their bodies again. Occasionally I would see one or two pelicans had been successful in catching a fish that was wriggling about in the pouch of its beak. This invariably drew the attention of the other birds who would harass the successful fisher in hopes of getting it to cough up its catch. This harassment continued until the pelican had finally succeeded in getting the fish pointed in the right direction, and with one huge swallow, helped it on its way. After this brief respite, the pelicans once more resumed their original semi-circle formation, and began drifting downriver again. 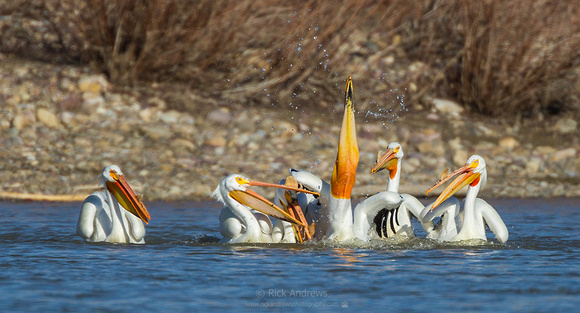 Not all the pelicans participated in this activity however as some preferred to stay on the gravel bar to preen or snooze. Still others decided to look for alternate fishing grounds elsewhere, and after taking off from the water, began circling, climbing higher and higher, until they found a wind current to take them in their desired direction.

Meanwhile, the original group was now taking a break from its drift fishing activities and were bobbing up and down in the turbulent water below the weir searching for any fish that may have been swept over it. While some pelicans braved the current at the centre of the weir, most stationed themselves along its edges, closer to the river bank, where the current was not quite as strong. There they fished for about a half hour, until resuming their familiar semicircle formation in preparation for drifting downriver again.

The few days I spent observing and photographing these pelicans were both enjoyable and educational, and I find the more time I spend observing nature, the less I really know about it, and the more intrigued I become. I'm fortunate to live in a community that still has such an abundance of wildlife and wildlife habitat, and where the presence of both is very much valued, appreciated and safeguarded.

Kyle(non-registered)
Amazing captures here! I initially noticed your "pelican swallowing big fish" shot. Wow so do you know how big and what kind of fish that was here, it looks huge from what you can see in the pouch, I wouldn't think the bird could handle such a meal! You could see it desperately wriggling in the birds pouch and even as it was swallowed (alive then?!) as the pelican beat her competitors as well?!? I'm guessing the poor fish is digested in that condition?? It's a great capture and must be quite the meal for her! Keep it up! ;)
Patricia Polo(non-registered)
Thank Rick for share this experience. Are very interesting your comments and your obsrvations. The pictures so beatibul.
No comments posted.
Loading...
Subscribe
RSS
Recent Posts
Wildlife Photography for the Greater Good Responsible Wildlife Photography 2018 - Year in Review Coastal Wolves KEPA Summit 2018 Wildlife of the Oldman River Documentary Film Update Kenow Fire - More Questions than Answers BC Government to end Trophy Hunting - Sort of Alaskan Coastal Brown Bears Wildlife of the Oldman River Documentary Film
Keywords
Canada Rick Andrews Wildlife Photography Alberta Wildlife Avian Wildlife Rick Andrews Nature & Wildlife Photography British Columbia Oldman River Valley Great Bear Rainforest mammal
Archive
January February March April May June July August September October November December
© 2010-2019 Rick Andrews Photography
Powered by ZENFOLIO User Agreement
Cancel
Continue