Last week I made a day trip down to Waterton Lakes National Park to engage myself in some winter nature photography. It was a beautiful sunny day with mild temps and clear skies that enabled me to catch my first glimpse of the mountains from just outside Lethbridge. Although the mountains were still well over 100kms (60 mi) away, I could see them clearly, and could easily identify them from the Livingstone Range north of the Crowsnest Pass, all the way down to Chief Mountain in Montana and beyond. I always enjoy this scene and never tire of it, for me it’s a bit like walking into a room filled with old friends that you haven’t seen for a while. You get the chance to watch them for a few fleeting moments before they catch sight of you. It’s always a very special time.

For those who haven't had the opportunity to visit Waterton Lakes, its a gem of a park located in the very southwest corner of Alberta, where it borders with the province of British Columbia to the west, and Glacier National Park (Montana) to the south. Waterton, named for Victorian naturalist Charles Waterton,  was established in 1895 as Canada's fourth national park behind Banff, Yoho and Glacier (British Columbia). In 1932 it joined with Glacier National Park (Montana) to become the first international peace park in the world, a novel idea that in addition to promoting peace and goodwill between nations, also emphasizes the international nature of wilderness and the ongoing cooperation and commitment needed to protect it. Together, this unique peace park was designated a World Heritage site in 1995 for its distinctive climate, mountain-prairie interface, and its rivers which feed three different oceans.

After arriving inside the park I was greeted by one of Waterton-Glacier’s elk herds. The elk here are also "international" as they spend their summers in Montana, before heading back for the fall rut, and to spend their winters here in Alberta. I spotted them grazing on the snow-covered slopes right beside the highway, and found them to be more wary than their Banff and Jasper cousins. But they were close enough to get a few shots without disturbing them, and that's the type of photographic encounter I always hope to achieve. 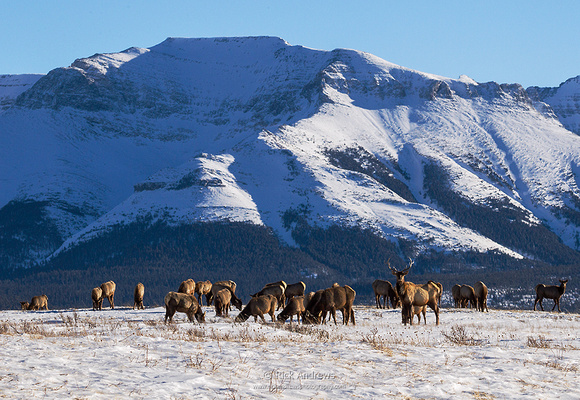 Like most national parks, not all roads are plowed in winter leaving some areas of Waterton Lakes inaccessible. This not only provides more winter habitat exclusively for wildlife, but also great opportunities for cross-country skiers and snowshoers to get out and do their thing. I even caught site of two intrepid British Columbia ice-climbers carefully ascending a frozen waterfall below Crandell Mountain.

But even on days when winter wildlife viewing is scarce, one can almost always rely on Waterton’s resident mule deer population to provide photographic opportunities. They can often be found grazing right in the townsite or sometimes on the windblown slopes around the Prince of Wales hotel. Considered by some to be common and uninteresting, I always think any wildlife viewing opportunities are special, and over the years I've found muley's often make excellent photographic subjects.

As the day ended and I began making my way back home, I glanced over to see Chief Mountain illuminated by the last light of day. This is a sacred mountain to the Blackfoot First Nations people who believe it honours an ancient war chief killed in battle. Legend has it that his distraught wife then climbed the mountain before throwing herself and their baby to their deaths on the rocks below. The body of the chief and his family were then buried amongst the rocks. 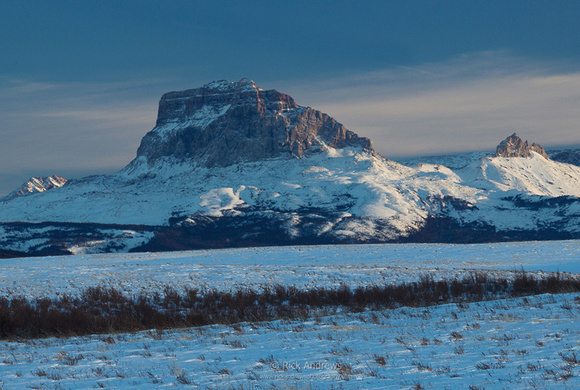 Yet another legend claims it was Napi, the old man, who came down from his home in the sun to help the Blackfoot people. When his work was done, he went up into the mountains, where he came to two lakes. There he said to himself, "I believe I will go up on that highest mountain and change myself into stone." In the crevice in the mountain, he lay down, with just his face peeking out, and turned himself into a rock.

In my younger days I was privileged to climb Chief Mountain and remember that experience well. It was an extremely exciting and rewarding day for me because I guess in some small way, climbing it connected me with the mountain. On that day, I became a very small part of its history, and it became a very important part of mine.