Someone asked me the other day why I enjoy photographing in the mountains so much. It seemed like a pretty straightforward question, yet one I couldn't easily answer.

Growing up in Toronto during the late ‘60’s and early '70’s I was influenced by a lot of singers and songwriters including Gordon Lightfoot and John Denver. I found Lighfoot’s songs delightfully poetic and in many ways they reminded me of the beautiful southern Ontario countryside.

By contrast, Denver’s songs were often about the mountains, and listening to them created an inexplicable yearning in me, it sounded like such an incredible place that I really wanted to go and see it for myself.

After deciding against raising our young family in Toronto, we moved west and settled in Lethbridge, Alberta, a community at that time with a population of just 50,000 people. It was well away from the hustle and bustle, and pollution of major cities. It was a place where kids could play outside, a place where parents didn’t have to be overly concerned for their safety. A place where kids could just be kids.

Lethbridge is only a little over an hour from the Rockies and I remember my first visit vividly. There are no foothills in this part of the country, so the mountains can be seen clearly from 100 kilometers away, rising abruptly to stand 2,000 meters above the surrounding prairies. I watched excitedly as they grew ever closer. 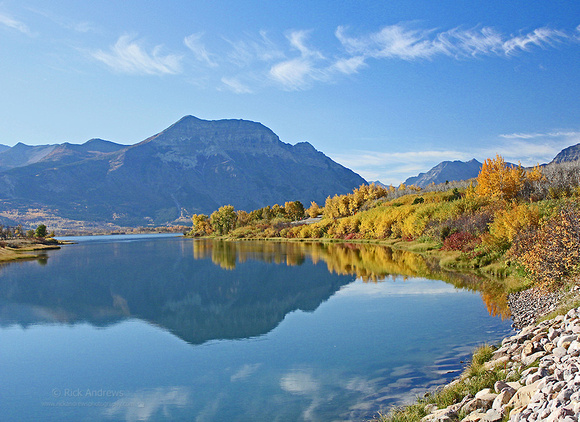 Once there I saw its majestic and rugged peaks, its pristine lakes, its streams and rivers that cascaded and tumbled over and around boulders and rocks, and I experienced its aromatic woodlands scented with fir and pine. Then there was the wildlife - moose, elk, deer, sheep, goats, bears, lynx, hawks and eagles. And though I had never been here before, everything felt so very familiar, it felt like I was home, that this is where I belonged. I heard the words of John Denver ringing in my head.

He was born in the summer of his 27th year
Comin' home to a place he'd never been before
He left yesterday behind him, you might say he was born again
You might say he found a key for every door

Incredibly, that first visit was almost 40 years ago, and since then I’ve returned often and spent many happy hours in the mountains where they continue to provide me with more beauty and inspiration than I can find anywhere else. I guess you could say my images are photographic memories that tell a very small part of the grand story of this beautiful place. They link me with it, and continue to provide me with fantastic opportunities to experience it over and over again in every season.

Photography also provides me with opportunities to seek out the solitude and intimacy of the mountains. Here I’m surrounded by nature as it was intended to be, and I experience a sense of freedom and awe that somehow puts everything else into perspective. It’s a place where I can think more clearly, where everyday worries evaporate with the thermal winds, and life somehow just seems to make more sense.

I guess that’s why I’m drawn to the mountains, why I keep coming back to them, and why I hope to continue doing that for many years to come.