The day I arrived in Grand Teton National Park it was raining and any view of the mountains was totally obscured by the heavy blanket of cloud that had descended upon the Jackson Hole Valley. The next few days were much the same, so I used this time to learn a little more about the park, its history and its wildlife.

I learned the park had been named for its tallest mountain, “discovered” (no doubt to the great amusement of the local First Nations people who had been coming to this valley for over 10,000 years) by 19th century French speaking fur trappers who named this range les trois tétons  (the three teats). The name was later anglicized, and revised slightly to become Grand Teton’s.

I also learned that while it took only 2 years to establish the world’s first national park – Yellowstone, it took over 50 years to establish Grand Teton. The original park was created by an Act of Congress in 1929 and consisted of only the Teton Range and several glacial lakes. But any potential future expansion was vehemently opposed by local ranchers, businessmen and regional US Forest Service personnel who viewed it as a threat to traditional hunting and grazing rights, as well as their individual freedoms.

Luckily due in no small part to visionary men such as Stephen Mather (the first director of the US National Park Service), his assistant Horace Albright, and the philanthropy of John D. Rockefeller Jnr who through his own company (Snake River Land Company) purchased over 35,000 acres of land which he then donated to the National Park Service, the park slowly began to grow in size.

Driving around the park, much of its history is still evident today, a few privately owned ranches still dot the valley within the park boundary; at the Grand Teton Discovery and Visitor Center, a bronze plaque memorializes Stephen Mather; there is the Albright overlook; and the Laurance S. Rockefeller Preserve, formerly a Rockefeller home, where the public are invited to enjoy the scenery and freely wander its trails. 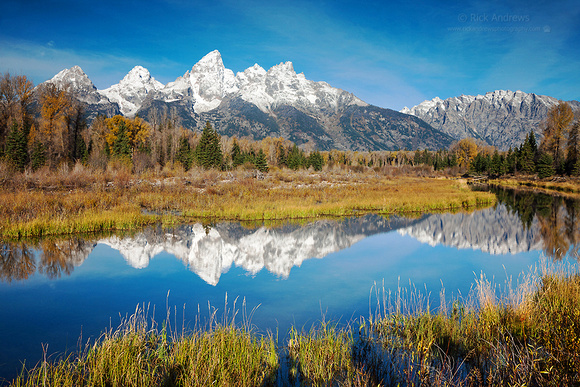 Late on my fourth day, the weather finally began to break and I had my first glimpse of the Grand Teton Range which was like nothing I had ever seen before. Rising abruptly more than 7,000 feet from the valley floor, this mountain range is stunningly beautiful, and reminded me of fanciful landscape paintings I had seen, but had often dismissed as being unrealistic. Simply put, I was awestruck.

Most of my days in the park began the same way with a pre-dawn drive to Windy Point where for a few short minutes each morning until sunrise, I was able to watch and photograph the parks elk herds. The bugling sound of the bulls in the chilly, early morning light is hauntingly beautiful, an experience I always enjoy. 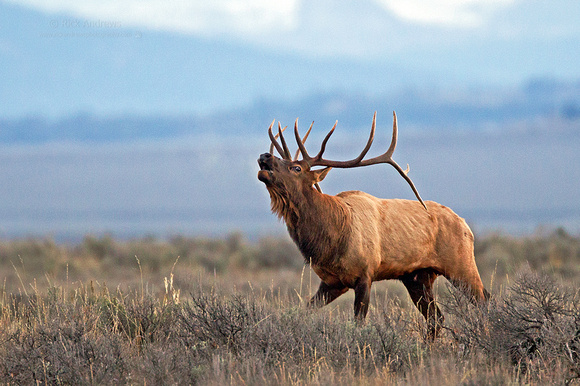 Elk-0753The annual rut is an exhausting time for bull Elk (Cervus canadensis) who must not only mate, but protect their harem by fighting and driving off any would-be contenders. This leaves little time for rest and even less for feeding, so some bulls enter the long winter months exhausted and emaciated.

Later in the morning I would look for moose and often found them feeding and moving about the woodland more freely than later in the day when they would typically bed down in trees. I especially enjoyed watching the behaviour of the bulls as they began to sense a rival presence in their area. This usually began with them thrashing their antlers on nearby shrubs and tree branches, and sometimes pawing at the ground to warn rivals of their unwelcome presence. Most intruders were younger bulls who ran off at the first signs of confrontation, still the dominant bulls would continue their vigilant watch to ensure they didn't return.

These activities, together with seasonal breeding, are physically exhausting and negatively impact the time bulls have to spend grazing. Many of the bull elk I saw were visibly lean, and one I observed later in the week was so exhausted, that other than twitching his ears to stave off flies, he continued to lay unmoving in the same spot for several hours. 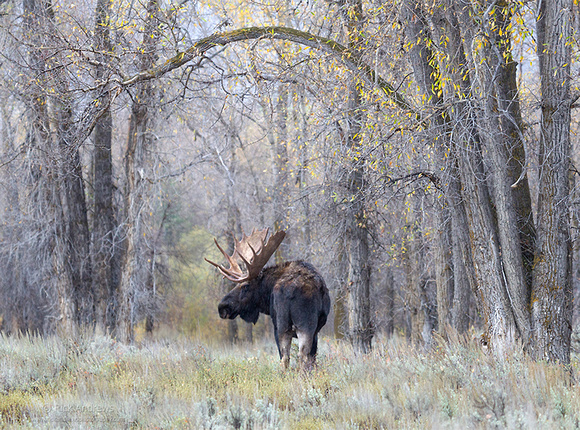 In late afternoon I would sometimes find smalls herds of pronghorn, the fastest hoofed animal in the world, where like the elk and moose, the herd buck was often kept busy driving off younger males. And though I had heard of a large herd of plains bison seen by numerous people near the Mormon Barns, I was never able to find more than a handful. But then it’s always amazed me how large animals like this can seemingly just vanish into wide open country.

I spent the close of each day watching beavers along the Snake River. These industrious little mammals so fascinated me that I was always disappointed when it became too dark to continue photographing. But I so enjoyed watching and photographing them that I’m tempted to dedicate a future blog post to them.

Grand Teton National Park is an incredible place that together with Yellowstone National Park forms the Greater Yellowstone area. It's an amazing place to visit, and experience, and I now understand why Mather, Albright and Rockefeller pushed so hard for the expansion of this magnificent park, and remain grateful for their vision, tenacity and significant achievement.