Hunting in the Great Bear Rainforest

I just finished reading a press report issued yesterday by the Center for Responsible Travel, in Washington DC. The report entitled “Economic Impact of Bear Viewing and Bear Hunting in the Great Bear Rainforest of British Columbia” found that in 2012, eco-tourism generated 12 times more visitor spending in the Great Bear Rainforest than grizzly and black bear trophy hunting, and employed almost 500 people more.

The study was undertaken by Stanford University researchers who interviewed bear-viewing companies, hunting guides/outfitters, visitors, and conducted in-depth interviews with government officials, First Nations leaders and hunting and wildlife viewing associations involved in the GBR. The results were then compiled using Statistics Canada’s Input-Output Model of the British Columbia economy, and other than the BC governments own figures, is perhaps the first impartial academic study to compare the two sectors. The release of the study comes amidst a controversy over bear-viewing and trophy bear hunting, in the Great Bear Rainforest which first made national headlines in September of last year when NHL player and BC resident Clayton Stoner shot and killed a grizzly bear, cutting off its head and leaving its body to rot. An act that I think most hunters would also strongly disapprove of. A year previously, Coastal First Nations representing some 20,000 First Nations people in BC, imposed a trophy hunting ban on bears throughout its lands, however the BC government maintaining that it is the sole regulatory hunting authority, continued to authorize the hunting of black and grizzly bears in the GBR. 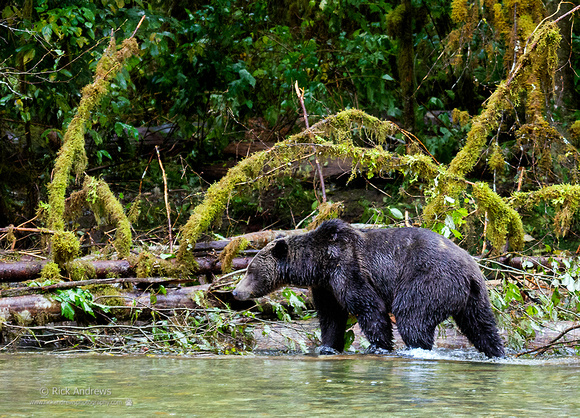 This study further identified over 50 bear-viewing companies who collectively generated an estimated client spending total of over $15 million, which is perhaps low given that only 25 of the 53 companies completed the relevant survey questions. This compares to only 4 outfitting/guide companies who collectively generated just under $1 million. The study also found that most (80%) trophy hunters are from the U.S., while bear-viewing visitors come from Europe, Asia and the U.S., and is therefore less dependent upon a single market.

While hunting has its place, I don’t believe that place is in the GBR, and from a purely economic standpoint, this study appears to support that. After all bear-viewing companies can continue to lead groups into the GBR throughout the natural life span of a bear, whereas a guide will likely only lead a hunter to a bear once. But even if the hunter were unsuccessful, it’s doubtful to me that bear-viewing companies could achieve the same level of success taking viewers into areas where bears are regularly shot at. One only has to see the difference between a coyote accustomed to people armed with only cameras in a national park, and ones that are regularly shot at by ranchers and farmers to understand the potential viewing differences.

This is not the only time that the BC Government has been called to task over the provinces hunting polices however as in the winter of 2012 a wolf-killing contest in northeastern BC came to light. The contest offered cash prizes of up to a $1000 for the largest wolf, and $150 for the smallest (which hopefully wasn't a young pup) and limited the number of wolves to 3 per hunter. Rich Petersen, identified by the Vancouver Sun as a Fort St. John B.C. hunter and realtor, and co-organizer of the contest was quoted as saying “It’s just kind of a social thing that’s gotten bigger every year …. if you are driving down the road and see one and you happen to shoot it and you’re in this contest, you have a chance to win something.”

This story understandably drew outrage from many BC’s residents as well as public condemnation from around the world which went so far as to call for a tourism boycott of the Alaska Highway.

As I said, I believe hunting has its place, and while I personally don't hunt, I’m not opposed to those who do providing it’s done in the right areas, under proper control and regulation, and there is scientific evidence to support culling a particular species. But I’m not convinced that the Province of British Columbia has a very good handle on that right now.

Update: For an update on this story, please see Vancouver Sun correspondent Stephen Hume's articles of March 16 and March 23, 2014.